Ours, 38 years ago this August, took place in Wife's parents church, with a reception in the church's fellowship hall where wedding cake, punch and coffee were served. We had friends and family there and it was great fun, as were the months leading up to it.

A couple of years ago, a lady who works for me was getting married and she asked me to be their only witness. We went to the county courthouse, and the ceremony was held in a little gazebo on the lawn.  They had written their own vows and it was lovely. It was the happy couple, the officiating pastor and me. She referred to me as her maid of honor!

And there are millions of other kinds of weddings. In some countries/cultures, the wedding ceremony and celebration might last for days. Some couples elope. Some have a few friends and family. It's all about what you want and what you're comfortable with.

The end result is the same: two people stand before someone and, if they are people of faith, God, and profess their commitment to each other. At the end of that, they are married.

Some people don't much like weddings. I rather enjoy them. I am plus or minus on a big party that might coincide with it, but the part I especially like is witnessing two people commit their lives to each other. Because I am a person of faith, I love the spiritual element and how two people become as one -- the mystical union, if you will.

If there is music involved, I love that too. I especially like a pipe organ or piano, but if it's a guitar or some other instrument, or even recorded music, that's fine too. It's fine, of course, if there is no music at all, but because I love music, I prefer it.

In just a few days, Younger Son and his fiancé will stand before all of us and commit to each other. It will be a rather large affair, because they want to celebrate with family and friends. Wife and I will host the rehearsal dinner the night before.

It will be a fun and joyous time, and I am looking forward to it.

This is the last of our three children to marry, and we are very happy for him. Our soon to be daughter-in-law has become part of the family, and we love her. Wife and I are lucky in that we are three-for-three in the in-law department.

Man, does life go fast or what?! Wasn't this little guy just born a few months, or at most a few years, ago? That little caboose on the end of our family's train that is still, to this day, the comic relief in our family? He's old enough to be married????

Plenty old, in fact. He'll turn 30 in October of this year. 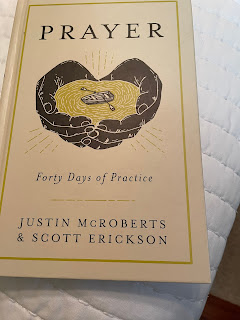 For nearly all my adult life, I have been part of a non-denominational church.

Although over time we have "warmed up" to liturgy, we do not observe the church or liturgical calendar.

I grew up Methodist, and I would say we were middle of the road as to following the liturgical calendar. I vaguely remember learning about the different church seasons when I went through confirmation but to this day, I could not name them all.

I still love the season of Lent and usually try each year to go through a Lenten devotional. This year's is a splendid little book simply titled "Prayer: Forty Days of Practice."

Although it's not specifically written for Lent, it lends itself well to it since it's 40 days.

The authors are Justin McRoberts and Scott Erickson, of whom I had never heard until the book was given to me as a Christmas gift. To give you an idea of the book's rhythm, I'll quote from the back cover:

" 'Prayer: Forty Days of Practice' invites you to pray in more authentic and untethered ways. These prayers and images, along with contemplative reflections and suggested practices, are designed to stir and clarify what God is doing in you, which is the heart of prayer."

The prayer for each day is brief and written in what is called the "jussive mood." I had also never heard of this until I started this book. The prayer for Day 1 is, "May love be stronger in me than the fear of the pain that comes from caring."

Apparently, the jussive mood is what is used in the Genesis creation account in which God speaks things into being by saying, "Let there be . . . "

According to introductory narrative in the book, "Praying 'May I . . . ' is a way to enter into the work God is already doing in, around, and through us, according to His will and design."

Woven throughout are six different meditations that serve as transitions among the book's sections, with narratives on spiritual practices such as journaling and fasting.

There are also sketches -- or "contemplative imagery" -- drawn by Erickson, an accomplished artist.

As you can see, there is a lot here, and my descriptions hardly do it justice. I think it is just the right Lenten devotional for me this year.

When I was in elementary school, I assumed I would eventually be drafted into the military and would go to Vietnam.

In our school we had a music teacher, of all people, who would get all the guys worked up over it. She told us there were people watching us in public places (like athletic events) when the pledge of allegiance was said or the national anthem was sung, and if we didn’t stand straight with hands over hearts on such occasions, they would make sure we were on the front lines of combat.

I don’t know where she got her information, who those people were supposed to have been or why they would have wanted seemingly disinterested speakers and singers fighting out front. But I took her admonition to heart and stood straight when the pledge was said or anthem sung, in hopes of having a desk job should I ever have to make that trip to Vietnam.

Imagine my relief when I was in junior high school and the Vietnam war ended. By the time I graduated from high school and went to college, I no longer worried about having to go.

Not that I would have shirked my duty if called upon. But from what I had seen and read about Vietnam at the time, it was not a place I wanted to visit. So yes, I was relieved when I learned I probably would not have to go.

I would transition into my adult life without thinking much about war, as we enjoyed a time of peace post-Vietnam. Even the Cold War eventually ended with the fall of the Iron Curtain.

Then came Desert Shield and Desert Storm in the 90s, and the eventual “war on terrorism” after the World Trade Center attacks on September 11, 2001. With the perpetual military action in Afghanistan (until the recent withdrawal) and all that has happened with Iran and Iraq, it seems there has been something going on “over there” for 30-ish years.

That “over there” refers to the Middle East and it seems there is always some conflict, whether the U.S. is directly involved or not.

But since the end of the Cold War and with the cordial relationship among North American and European allies, the European area has been mostly peaceful. Although the worth of the North Atlantic Treaty Organization (NATO) created in 1949 has been debated from time to time, it has provided a sense of security to the U.S., Canada and European countries.

And you know where I am going with this. The “over there” where fighting is now taking place seems a little closer and makes us more uncomfortable as Russian President Vladimir Putin directs the Russian invasion of Ukraine.

We have hoped and prayed for months it would not happen. In the February 20th edition of his newsletter “The French Press” (part of The Dispatch news site), David French of Franklin said he was recently asked, “What are you specifically praying for today?”

His immediate answer was, “I’m praying that God turns Vladimir Putin’s heart from war.” I can’t think of a more appropriate prayer.

Although horrified by it, we should not be surprised by Putin’s actions.

He wrote it when he knew he was likely dying of cancer, saying he had a few more things to say to Americans. It’s a great retrospective on his political life, particularly his time in the Senate and his unsuccessful run for the presidency in 2008.

He also spent some time lambasting Vladimir Putin and warning readers what he was capable of. He was as direct as he could possibly have been, pointedly writing, “Putin’s goal isn’t to defeat a candidate or a party. He means to defeat the West.”

I admit to a chill going down my spine when I re-read those words with the knowledge of what is happening today.

And I would love to think McCain was wrong (although I’m hardly naïve enough to believe he was).

President Biden has joined European leaders in imposing harsh sanctions against Russia, attempting to essentially cripple the economy there. We will experience inevitable repercussions here, with market volatility and even higher gas prices.

Even the most optimistic of pundits say we are in for a bumpy ride as events unfold, while we continue to pray for peace. (We really need to pray.)

Watching footage of Ukrainians fleeing their homes is heartbreaking. It is all too reminiscent of others doing the same in war-torn parts of Europe less than a century ago, folks like the Ukrainians of today who desire nothing more than freedom – but nothing less, either.