I’m on a train traveling from Lake Como, in Italy, to Salzburg, Austria as I come to the last few days of my time with Wife on her retirement trip.

This is the first time in my entire working career I have taken two consecutive weeks of vacation. Not     bad at all.

It’s been a glorious time in Italy, starting with just the two of us in Cinque Terre, then onto Venice where we met our Arkansas friends, then to Florence, then to a charming B&B in Tuscany (for a welcome change of pace), before the last two days in the town of Varenna on Lake Como. Other than the past couple of days of on-and-off rain, we’ve had splendid weather, with highs in the high 60s to low 70s and lots of sunshine. 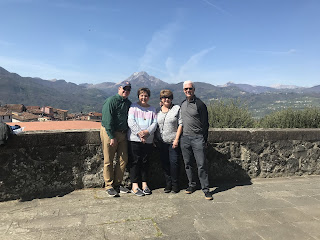 We’ve navigated the trains beautifully. It presents some challenges, but with a little patience and persistence (and willingness to ask questions of the locals), it’s doable.

This morning we parted from our friends who are now en route to the Amalfi Coast and Rome. I’ll fly home Sunday, while Wife will continue on to London where she’ll meet up with Younger Son.

When we got married nearly 35 years ago, Wife was ahead of me in our careers.

An accountant by education, she was working in the budget department of a utility company, while I, just a year out of law school, was clerking for a circuit judge.

Her income exceeded mine.

I changed jobs a few months after our wedding and got a bump in my salary, but hers was still greater than mine.

About eight months after our wedding date, she told me she was "feeling funny." I told her I was sure it would pass (I've come a long way in the "being in tune with my wife" category since then), but she said no, it seemed like something really serious, like she had lost control of her life. She couldn't explain it.

Again, with a little more concern, I told her I was certain it was something normal, like maybe she was overly tired.

Well, she had in fact lost control of her life and she was overly tired. She was pregnant.

I don't know why we were so shocked. We weren't spring chickens when we married and we knew we should start a family fairly soon, but somehow, we never thought it would happen when it did.

But it did, and in January 1986, our first little bundle of joy joined us and things have never been the same since.

This was before the generous maternity leave policies of today. Wife went back to work six weeks after Older Son was born. It was one of the worst days of my life because without question, she did not want to return to work.

I will spare you all the details, but about one year later, she quit to stay home with our son. We knew she would probably eventually return to the workforce but at the time, we decided she would stay home for a while. Even though she still made more than I did, we were willing to do what it took to allow her to be at home for the time being.

As time went on, she did return to work, but never in the sense that she had to go somewhere and be there all day, every day.

She has owned two different businesses, keeping books and doing accounting work for small businesses and non-profits. She started the first one when she was pregnant with our daughter (What? Is that not a logical time to start a business?), and sold it when we moved from Little Rock to Nashville in late 1997. (Another baby boy, our last one, had come along in '92).

She took another break from working the first year we lived here, then eventually became the financial manager for our church. It was a "church plant" at the time (meaning a new church), and word had gotten out she had done some accounting work for churches in the past.

The rest is history, and she did that job for 20 years before retiring last week. For a couple of years during that time she restructured a bit, and she and I formed an LLC. She hired Older Son as an employee of that company and did the church work independently with them as a client. And with Older Son working with her, she took on two or three more clients.

After Older Son  moved to Dallas in 2011, we shut that down and she went back to the church as an employee, and has been pretty much full time since then. She has always maintained a home office and since we live about a mile from church, it is has been easy for her to go there when she needs to.

Wife has never been what one would call a "feminist" or one of those women who says she can "have it all."

What she is, is a woman who knew she wanted to be home with her children when they were small, and after they started school, be around if possible when they arrived home in the afternoon.

She also had an education and a keen mind. At times she considered going back to work in the more conventional sense. If she had, we could have made that work, and she would have been every bit the outstanding mother she was and is.

But through her tenacity and discipline, and God's kindness, she was able to maintain a job that she was mainly able to do from home.

Because she was at home, she was never truly away from work. But one of the big advantages was she could work at odd times if needed. If one of our children had something going on where they needed her during the day, she could usually be there.

But at times it required sacrifice from all of us, staying out of her way if she was in the middle of a big project, or allowing her some night or weekend time when she needed it.

But isn't that how a family works? You all pull together to help. Sacrifice and putting others ahead of yourself builds character.

Last Sunday night, the church honored Wife with a lovely retirement dinner at a local restaurant. There were 50 guests, including our older two children and their spouses. Tributes were made to Wife and the words gracious, hospitable and kind were used over and over. There was also a lunch for her on Tuesday with her work colleagues where many similar things were said.

It was also mentioned how she built the financial and accounting system for a church that grew from 40 to 4,000 and how, after countless audits, there was never any question about the soundness of all of her records. One of our pastors said, because of what she has done behind the scenes, he is able to do what he does.

A few years ago, we started talking about Wife retiring. She is a little older than I, and she said she thought it would be time soon. That was probably five years ago (maybe we had a loose definition of "soon"), and for several reasons it took longer to get here than she planned, but about two years ago she knew it was time. I've never known of anyone giving two years' notice at a job, but she did. Her replacement was hired last November and she worked closely with her until this past week.

Needless to say, I'm proud of her and I am also grateful. She never pretended to "have it all," but she worked in an excellent manner, helping support our family.

She will hardly retire, of course. Childcare opportunities will be in abundance with our grandchildren, and even today she is in Atlanta with one of them. She has plenty going on otherwise, too, but if there are days when she wants to sit here and just, well, contemplate or meditate, she has my wholehearted endorsement. (I've also told her she can sit around in fuzzy slippers and eat bonbons, but she didn't find that humorous).

To celebrate, she is taking me with her to Italy and Austria later this spring. After two weeks I will come home (I am NOT retiring), and she will meet Younger Son in London. They will spend another week exploring England and Ireland.

So she is going out with a bang.

Below is a picture of us from her retirement dinner, and another that Daughter took and labeled as, "Retired and Livin' Her Best Life." 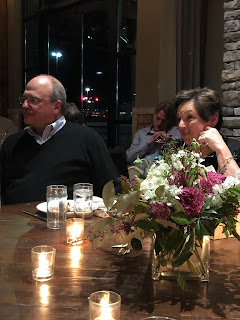 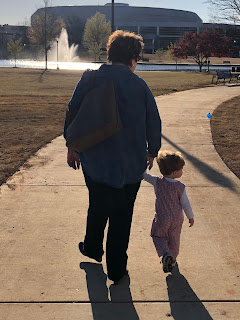