For our international Christmas Eve celebration last month, we celebrated the food and culture of India. It was another smashing success.

The only ones who wore indigenous dress this year were Daughter and SIL. Wife had something, but ran out of time and never quite got around to putting it on.

The little guys were with us at the start, but went to bed before we sat down to dinner.

The food was great -- chicken tikka masala, lamb kabobs, naan bread and some other dishes, the names of which now escape me. There were a couple of tasty drinks too, including a curry-based Scotch one with sounds dreadful but was very good.

Wife said this one was the most challenging for her, but as usual, she made it very special and we all had a great time. This was our eleventh year of our international Christmas Eve, which began the year Wife asked how we would feel about having "non-traditional" food at Christmas, and having it on Christmas Eve. We gave our hearty approval, and that year we had Mexican food.

The rest is history and what started as a departure from tradition has resulted in a tradition in itself. Go figure.

For the fourth year in a row, it was Wife, Younger Son and me on Christmas Day. We went to see the movie "Mary Queen of Scots," then were joined late afternoon by Older Son, DIL and GS2. We went to a great little burger and beer spot that was open. On the 26th, we celebrated Christmas and it was nice enough to be outside some.

Here are a couple of pictures of the Christmas Eve table before we all sat down, as well as the food table. 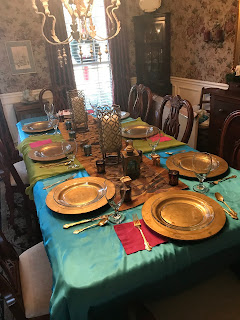 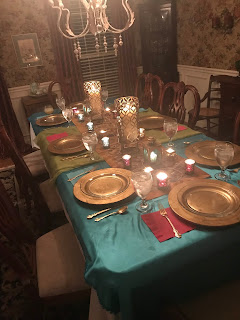 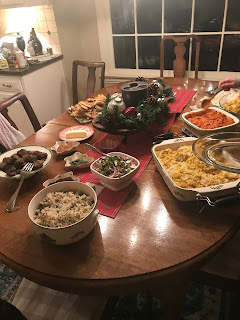 As I stated when I posted my list of favorite non-fiction books, I read much more non-fiction than fiction in 2018. However, as I look back over the fiction I read, I realize I liked each book -- some better than others, of course, but I liked all of them to some degree. Here are my favorites:

Crazy Rich Asians by Michael Kwan. This is a hilarious story of an Asian American woman who travels to Singapore, the home of her fiancé, where she learns he comes from a wealthy family -- wealthy beyond what she ever imagined. I watched the movie recently and it's also very good, although, as so often is the case, not as good as the book.

To Be Where You Are by Jan Karon. More of Mitford and Father Tim. I've read and loved all of them and this one was no exception. Karon is getting up in years and I'll be sad when she stops writing these.

A Fatal Grace by Louise Penny. This is number 2 in the Inspector Gamache series and I'm looking forward to reading the rest. Wife and I heard this author speak not long ago and she was great.

The Great Alone by Kristen Hannah. The story of two women enduring abuse, and enduring brutal Alaskan winters. I found the story compelling and I also learned a lot about Alaska.

A Long Way Down by Nick Hornby. I seem to always end up with one of Hornby's on my list. Four strangers come together in an unlikely way, as they all consider suicide. Somehow Hornby makes it funny, and not in an offensive way, and also makes it poignant. He's edgy, but he's an artful writer, and I'm never disappointed.

The House of Unexpected Sisters by Alexander McCall Smith. This is number 18 (!) in the No. 1 Ladies' Detective Agency series. As a rule, I don't purchase new books. I generally check them out from the library or buy them used at a book sale. This series is an exception. I think I have all of them in hardback and I believe No. 19 has just been released. I'm nuts over these characters and stories and I've enjoyed each book in the series.

Little Fires Everywhere by Celeste Ng. This dark novel tells the story of a mixed-race Chinese-American family dealing with the death of a child. Like Ng's first book, Everything I Never Told You, this is brilliantly written and grabbed me from the beginning.

The Big Rock Candy Mountain by Wallace Stegner. I read Crossing to Safety and Angle of Repose, two others by Stegner that are probably his best known, years back. I don't know why it took me so long to get to this one, but I'm so glad I did. Written in 1943, this is semi-autobiographical for Stegner, tracing the life of a 20th century family over three decades, the head of which continually seeks financial fortune and the next best thing. Like the other two referenced, there are depressing elements, but the writing is masterful -- as one would expect from Stegner.

I've started 2019 in the way of 2018, with two non-fictions under my belt and a couple more in line. I'm sure I'll need to escape into some good fiction soon. Let me know if you have any recommendations for me. Happy reading, everyone!

I promise to still post my favorite fiction from 2018, but in the meantime, I want to share with you a book review I did for my weekly column that was posted today. I highly recommend this, another non-fiction book I thoroughly enjoyed:

https://brentwoodhomepage.com/bob-mckinney-what-i-know-371/
Posted by Bob at 10:44 AM 3 comments:

I think acquiring a Kindle did much to boost my reading. Being able to download a book from the library onto a screen presents convenience and speed that's a tremendous help to me at this point in my life -- still with a fulltime day job and traveling two to three days most weeks.

Interestingly, more than two thirds of the books I read last year were non-fiction. This was not by design. As usual, I kept a running list of books I wanted to read (the TBR list), in no particular order (and it's largely a mental list). One at the bottom of the list, or not even on the list, could make its way to the top if it was what I decided I wanted to read at the time. And for whatever reason, the books that made it to the top in 2018 were predominantly non-fiction.

I mentioned some of these in past posts, so I apologize for the redundancy. Here are my favorite non-fiction reads of the year, in no particular order:

--  Bird by Bird by Anne Lamott. I've read a number of Lamott's books, but had never read this, one of her earlier ones. The subtitle, "Some Instructions on Writing and Life," is an apt description. Lamott is edgy, there's no doubt about it, and often edgier than I would prefer, but her writing is compelling which is why I keeping coming back.

-- Team of Rivals and Wait Till Next Year by Doris Kearns Goodwin. I wrote about both of these books last April. "Team of Rivals" is the book the movie "Lincoln" was based on, and was one of the 800 pagers. "Wait Till Next Year" is Kearns-Goodwin's memoir of growing up in Brooklyn and her relationship with her father and their mutual lover for the Brooklyn Dodgers. I learned about this author from blog friend Jeff ("Sage") and am most appreciative.

-- A Higher Loyalty by James Comey. I'm a big fan of the political post-mortems, in spite of their biases. I thoroughly enjoyed this one. Self-serving? Without question. An agenda? Of course. Wouldn't you have one if you had been fired (very publicly) by the President of the United States?

-- The Restless Wave by John McCain. Ditto my first comment on the Comey book. I read this shortly before McCain passed away. He was a true statesman and patriot, and this was a great read.

-- Educated by Tara Westover. This one is still making bestseller lists. A young woman who was denied an education by her quirky parents practicing an extreme form of Mormonism took matters into her own hands and eventually earned her PhD. Her narrative is well written and her story is captivating. I highly recommend.

-- Theft by Finding, Me Talk Pretty One Day, and The SantaLand Diaries by David Sedaris. I have heard about Sedaris for years, and have read some short pieces by him, but had never read any of his books. Hilarious, poignant and beautifully written, these were all great, fun reads that made me laugh a lot and from time to time made me think.

-- Dispatches from Pluto by Richard Grant. This one made it to the top of my pile based on Kelly's excellent review last year. I was not disappointed. A British writer buys a home in the Mississippi Delta and while immersing himself in the culture there, receives a lesson in race relations that surprises him. I loved this.

-- Everybody Always by Bob Goff. The sequel to his popular "Love Does," Goff continues with his emphasis of radical love toward his neighbor, with more stories of the remarkable work he has done in third world countries.

-- Learning to Speak God from Scratch by Jonathan Merritt. Wow. I'm going to have to read this one again. The subtitle is "Why Sacred Words are Vanishing -- and How We Can Revive Them." There is so much here. Not only does Merritt delve into words and their meanings, he challenges norms and calls us to a stronger faith life -- to discover a faith worth talking about. I recommended this one to Kelly and she reviewed it on her faith blog here.

-- Hamilton by Ron Chernow. The other heavyweight for the year, I'm so glad I read this before I saw the play. (See my summary here from late 2018).

I hope you might find something that piques your interest here, and please let me know when you read something good yourself. I'll be back soon with my favorite fiction of the year.
Posted by Bob at 9:59 PM 5 comments: