Here are my columns from the past two weeks:

I am still trying to sort out the variety of feelings I have after what took place in Paris last week.

Grief, sadness, confusion and anger are among those.

Wife, Daughter and I were in Paris just two years ago. It's a truly magical place and the few days we spent there were not nearly enough. Wife has plans to go back with some friends in the spring.

She is now trying to decide if she should go through with those plans. I tell her absolutely she should, that when we alter plans because of the monstrous deeds of these people, we allow them a small victory.

With each terrorist attack, we become more cautious and, perhaps, more fearful.

What motivates people to take part in such horrible acts? And in the name of their view of God?

After September 11, 2001, we have never boarded a plane the same way. And with each event that takes place, security becomes more of a concern.

We go to a movie or a concert and now, even church, and sometimes wonder what might happen. At more and more venues we walk through metal detectors as we enter.

And how do we ever feel truly secure?

I truly hope to be a grandfather someday but, at the same time, I can't help but wonder what kind of world these future grandchildren of mine will be growing up in.

Did our ancestors feel the same way when Hitler was plotting his master race and orchestrating the massacre of innocent people?

And is it time to take extreme action against radical Islam to ensure their monstrous ways are thwarted?

And how do we take action against a concept -- not a place?

I realize there are more questions here than answers.

But somehow I'm short of answers right now and all I can do is pray.

And that, my friends, is perhaps the best -- and only -- answer I have right now.

Thanks to our veterans

As promised, I am posting a link to my weekly column here. Although it usually runs on Mondays, I asked my editor to run it on Veterans Day this week. It was great to be with my aunt and uncle over the weekend.

Veterans Day column
Posted by Bob at 11:10 AM 2 comments:

Music to my ears

Back in the spring, we learned some friends of ours would be selling their baby grand piano.

I started playing piano as a youngster and took years of lessons. Not long after I finished law school and had my own place, I moved my little spinet from my parents' house to mine, and it has been with me every move since.

But I've always wanted a baby grand. I think they are beautiful and I love the majestic sound.

The fact is, I never practiced enough to become an accomplished pianist, but I still love to play.

When I learned our friends were selling their baby grand, I inquired about it and they gave me a great price. I would also have to make arrangements to have it moved from their house to ours.

But I decided against it. We were in the midst of planning the wedding and I also had some uncertainty about my job. I took a pass on the piano. There would be a better time.

Fast forward to mid-September. I asked my friends about the piano, figuring they had long ago sold it.

They still had it. They were still offering me the same price.

Wife and I talked about it. The wedding is paid for, she said. You have your job, she said.

And she said I should get the piano.

Wife wrote them a check and a few days later the piano was moved into our house.

I am woefully out of practice, but I can't tell you how much I am enjoying this beautiful instrument.

Merry Christmas and Happy Birthday to me -- for the rest of my life. 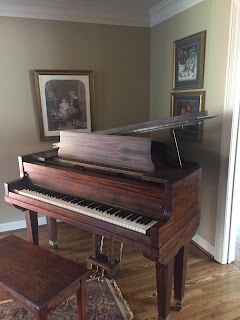 A new look and a new day

Blog friend Kelly, who got me started blogging about seven years ago, recently wrote about passing the ten-year mark on her blog.

As I said, mine is about seven years old, and with that, I think it's time for a new look and a renewed commitment to this site.

As I've mentioned previously, in 2011 I began writing a weekly column for a local publication. It has been an absolute blast and I have freedom to write anything I like, about any subject. I'll write about local subject matter and politics on occasion (from the point of view of an observer, rarely offering an opinion), and I get decent feedback.

I get the most positive response, however, from my "everyman" installments -- stories about everyday life that will occasionally strike a chord with a reader or two. And that's what has usually gotten the best response here too.

There's no doubt that my blog posts began to lessen when I started the column. And this past year my posts have definitely been fewer and farther between.

On a recent trip to Arkansas, I ran into an old friend who has followed this blog since its inception. When I told him what I just told you (that I didn't write on the blog as much since I started the column), he suggested I post a link to my column here.

I believe that's been suggested before but now I'm going to do it. My new columns are generally posted on Mondays so I'll try to post the link Monday or Tuesday.

Now, I don't flatter myself so much as to think all of you would click on the link. I'm doing this in response to a request and in hopes it will make me more prolific here, not just posting this link but also writing additional entries.

Many of the folks who have gone along on this blog journey with me have dropped off, possibly in favor of Facebook. I get that but that's still not my thing.

I'm going to tidy up a bit on my list of frequently visited blogs and hopefully add some new ones.

I have just acquired a new laptop computer and I think that's going to help me to come here more often too. For a long time I've been sharing with Wife. She's great to let me interrupt her at times but she uses her computer for work most of the time, so it's not always convenient.

I just hit a preview of this piece and I don't think the the link is going to work so bear with me on that part. I am still woefully inept when it comes to technology, but I'll figure out what I'm doing wrong and come back and post it later.

**UPDATE: OK I came back and might have figured out how to make the link "live."


Thanks to all who stop by here from time to time and I hope this marks a new beginning.