I've been saying for some time now that we are in the "revolving door" years -- a phrase Wife actually coined and one that others have no doubt used.

We experience it fairly regularly with DSO (Daughter's Significant Other) who visits frequently, as well as various other comings and goings. For the past three weeks Younger Son, now with two years of college behind him (and all God's people said, "Amen!") has been with us. It has been a joy to have him at home and, just as I was getting used to having him around, he's gone again.

He will be in Dallas this summer, doing an internship with a local magazine there. He's excited and I'm excited for him to have this opportunity.

And yes, that is where his brother and sister-in-law live and yes, they urged him to look for something there this summer and he'll be living with them.

Well, kind of. They were ready to welcome him with open arms but remembered that their next-door-neighbor, a single guy, had mentioned a furnished garage apartment he had that was empty most of the time. Sparing you all the details, Younger Son will have his bed and bath there this summer. It really couldn't be a better situation and it's just steps away, literally, from Older Son and DIL. I'm betting those steps will provide just enough space between them at times.

Wife and Younger Son left Wednesday and drove to Little Rock and spent the night with Wife's parents, then drove on to Dallas yesterday (Thursday) to get Younger Son all settled in. Wife was only too happy to go along and get to have a visit with Older Son and DIL.

She'll fly to Birmingham in the morning. I'll pick her up there and we'll spend the rest of Memorial Day Weekend at our friends' lake house in North Alabama. Daughter and DSO will be joining us there.

Daughter's kindergartners graduated this morning at 10.  She was home by 11:30 and she was full of the details. Her eyes glistened a bit as she filled me in.

Of course I was only too happy to take Daughter to lunch to celebrate the graduation of her little class.

Indulge me here, but she is the type of teacher that you would want to teach your children, going the extra mile to make each child feel special. She made a notebook for each one of them called "The Busy Little Kindergartner" with pictures and mementos from the year, personalized for each one of them.

Nobody told her to do this; she just did it. Am I right? Would you not want this child of mine to be your child's or your grandchild's teacher?

We talked at lunch about how fast these two years have passed since she graduated from college, around the same time Younger Son graduated from high school and Older Son and DIL got married.

We talked about the fact that in many ways that seems like a lifetime ago, while at the same time seeming as if we just blinked and two years were gone in a flash and here we are.

And here I am, sitting in a quiet house, daring myself to blink and see where time will take me.

It was a nice day at the lake today. This fish were not exactly biting like crazy. The water was high and murky due to last weekend's heavy rains.  BUT -- I managed to reel in a few, including a couple of nice ones.

Like anyone who fishes (especially one who does it as infrequently and poorly as yours truly), I can take all kinds of license in telling you about my experience. The one that got away would have, of course, been a trophy of gargantuan size. I fought the guy for a good five minutes before he . . . well you can figure out the rest.

As usual after a few hours on the water, my spirit was renewed and my soul restored a bit. That's a good day. The smiles below are genuine.

Maybe next time the fish will give us more to brag about. 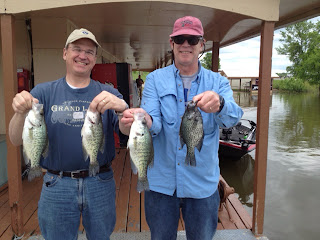