I got part one of the COVID-19 vaccination.

It's been a long time coming and I'm thrilled to have taken this step toward normalcy.

A friend had told me Wal-Mart opened up a portal every night at midnight for a rolling week, and you could schedule an appointment a week out. She's a night owl, so offered to do it for me. Shortly after midnight last Saturday night/Sunday morning, she scheduled my appointment for 5:40 p.m. yesterday at a Wal-Mart about a dozen miles from my house.

The pharmacy called about 3 p.m. yesterday to confirm I would still be coming and said I could come whenever I was ready. By 4: 15 I was vaccinated.

I thought I would be getting the Moderna vaccine, but when I arrived, I was told they had switched to Pfizer. It made no difference to me, of course.

Although I begrudgingly say anything positive about the Trump administration, I am appreciative for those who got things moving last year to make this thing happen. It is nothing short of miraculous that we have vaccines scarcely a year after this nightmare began.

If Trump had not acted the way he did (like a big baby who didn't get his way), never acknowledging Joe Biden as the new president, Biden would have likely expressed his appreciation himself.

But we'll not go into all that today. I am even more appreciative of President  Biden and his administration for expediting this process.

To be sure, we are not back to normal yet. I suspect it will be another year before we go into crowds without giving it a thought, and all sports and concert venues are back to capacity. I might wear a mask in public the rest of my life, because I think it protects me from all kinds of stuff floating around in the air.

It is also possible many of us will remain in the remote workforce. A lot of folks like it, and for most of us, it works. Patterns in work are cyclical, and I suspect we'll have a large segment of remote workers for a few years to come, and then will not be surprised to see more companies having people coming back onsite.

I'm happy with whatever happens. I can ride this work-from-home gig into retirement (although Wife might not agree with that) or I can go back to an office. At my age, the longer I can work and build up my retirement account, the better. Plus, I am not ready to find other things to do to occupy my time every day. I'm a creature of habit.

Anywho . . . . I'm half-way there. I'll return in 3-4 weeks for the second shot and shortly thereafter, I'll be hugging anyone who crosses my path.

Calm down, I don't really mean that. But if you're in the neighborhood and you're longing for a warm embrace, stop by. 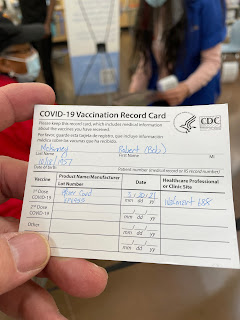