Wife and I just returned from a glorious vacation.

We both love to travel but I'm the lucky one -- Wife makes the plans and makes it happen. She spends untold hours doing research and planning an itinerary so that, by the time we are ready to go, all I have to do is pack a bag and either get in the car or board a plane, depending on the destination, and go along.

This year we flew from Nashville to Calgary (via a stop in Toronto). We rented a car there and drove to Glacier National Park in Montana before heading back into Canada and spending time in Banff, Lake Louise and Jasper.

Typically, Wife had planned a day-by-day schedule for us, but it was loose and as we went along we axed and added some things.

The scenery was nothing short of spectacular and we had an incredible time. The pictures below hardly do it justice and it would take me too long to do a narrative of all we did (besides the fact it would bore you to tears), but I'll put a few photos here. They include a glacial lake (thus the teal color), Lake Louise and Moraine Lake, and yours truly fishing on the Bow River near Banff.

Best story of the trip: Wife and I came up on a mama bear and two cubs -- about 20 yards away on a trail, just us and them. We walked the opposite direction before they saw us and they eventually took an alternative route. And no, I did not take time to get a photo (although I wish I had!). 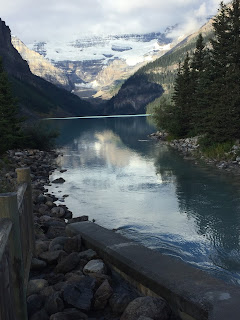 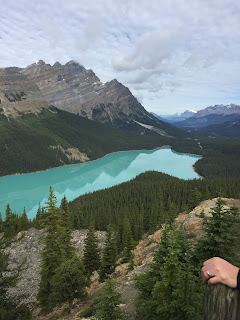 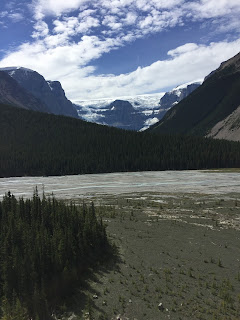 Over the years I have had this blog, I have written a bit about passages.

Life is full of them. And I guess a big part of life is moving from one passage to the next.

I wrote in my last post about Younger Son getting the job with the publication that covers Notre Dame. He is there now, and all seems to be well.

Wife and I left last Saturday morning in his truck and a borrowed truck, both packed with Younger Son's belongings. It's about a 7.5-hour drive from Nashville to Mishawaka, the town where he is living, which is right next to South Bend, where Notre Dame is located.  (We could make it in 7 hours if we didn't have to make bathroom stops but that's not happening at our age).

It's not a bad drive at all -- we just headed north from here.

You might be wondering where Younger Son was we drove up there. That would be a fair question, since it is he who has moved.

Well, for several months he has had a fishing trip in Wyoming planned, so when he got this job offer, he was able to negotiate a start date so he could still make the trip. We were happy to help him out so he could go. It took some logistical planning, but it all came together.

He left Nashville on Wednesday of the week we would drive to Mishawaka.

After we arrived at his new apartment, we took possession for him and unloaded his stuff. Since he didn't have a bed yet (he had ordered one to be delivered after his arrival), we stayed in a hotel. We worked at his place on Sunday before driving to Chicago, about 90 miles away, into which he flew Sunday night.

I drove back to Nashville Monday. Wife stayed until Wednesday morning when she flew home. Younger Son started work that day.

Yesterday we celebrated Wife's birthday and this Thursday we will have our 32nd wedding anniversary.

And time continues to tick away.

Notre Dame is a beautiful campus, with stately old buildings, and new buildings built to model the old buildings (or that's what it looks like to me).

I'm attaching a couple of photos, including one of "Touchdown Jesus," the famous mural painted on the outside wall of the library, which faces the north end zone -- hence the name. 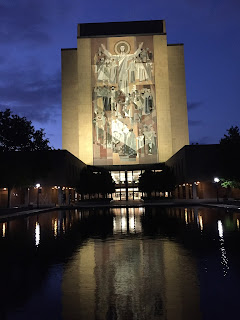 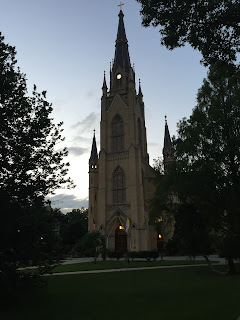