We had a nice Fourth of July vacation last week in our nation's capital.

We watched the fireworks and they were, in fact, a sight to behold. But the concert takes place over at the Capital and concert-goers sit up on the Capital steps, the big stage being at the bottom of and facing those steps, so that the back of the stage is what everyone spread out on the mall sees. We couldn't hear any of the concert and there weren't any big screens broadcasting it.

Had we wanted to be there watching and hearing the concert, we would have had to go through a long security line and sat out there in the sun hours before the start time of 8 p.m. And that area is all barricaded off and once you're in, you're in. So we opted out.

While that part was a bit disappointing, the day was fun. There's an unavoidable buzz of patriotism celebrating the Fourth of July in D.C.

I'll backtrack a little. Wife and I were invited to a wedding in Williamsburg, VA, a couple of hours south of D.C., to take place on Sunday, July 7th. The groom is the son of my best friend from my growing-up years in south Arkansas. I was Best Man in his wedding 30 years ago this November, and he was a groomsman in mine 29 years ago this August. He is one of my life's soul mates, one of those guys who knows me inside and out but loves me anyway. We still try to share big life events whenever we can. He was here for Older Son's wedding a couple of years ago.

Anyway, when Wife and I decided we would go, we started trying to figure out a way to get the family together the few days prior. Wouldn't it be fun, we thought, to get everyone together in D.C. over the Fourth of July.

And it worked, as things often do when we shamelessly entice our adult children with paid-for vacations!  Daughter, DSO, Wife and I drove to Lorton, VA, just outside Washington, on Wednesday, the 3rd. Older Son, DIL and Younger Son flew into D.C. and joined us that night.

One of the things that made this trip possible was that Wife's sister, who lives in Lorton, made her home available to us. She and her husband were out of town for a few days so we had the whole place to ourselves. We had free -- and lovely -- accommodations for seven people.

Back to "Capitol Fourth."  Wife had scheduled a tour of the Capital building at 1 p.m. We road the D.C. rail system, called the Metro, in from a station near where we were staying. The Metro system is great -- very clean and easy to maneuver, especially if you have two directionally gifted people with you, like Wife and Older Son.

The young folks did the Capital tour while Wife and I headed down to the Mall to scope things out. We have both done D.C. a number of times, including touring the Capital, so we were fine to miss it.

We found it crowded but not overly so. We found a nice park bench in the shade and sat down. A number of folks were already lining up for the aforementioned concert and this is when we learned how all that worked and decided, if everyone agreed, that we would pass on that part.

When the others called and said their tour was done, Wife walked up the hill and met them for lunch. I decided to stay behind and scope out a place for watching the fireworks. In hindsight, that was not necessary, but I was fine to people-watch and Washington, D.C. has to be one of the top places to do that.

One of the highlights of the trip for me happened right then and there, that afternoon. A group of about 50 Pentecostals, dressed in their long dresses and heavy suits, set a couple of tents up down there on the mall and began to sing hymns.  Their beautiful voices resonated and I sang right along with them. One of their leaders came over to me and said, "I believe you know them all, don't you?"

I told him I certainly did and how much their singing was blessing me. I really think they would have asked me to join them if I had been dressed appropriately.

When everyone came back from lunch, we set up our chairs in a shady area and came and went throughout the afternoon. We visited part of the Smithsonian and walked around.

About 9 p.m. the fireworks show started and we had a great view.  It was spectacular and it was a great day. We got out pretty easily and were back at our home base in Lorton by about 11:15.

The next couple of days were fairly leisurely. We went to a Washington Nationals baseball game, did a night-time drive around the monuments, visited an extension of the Smithsonian Air and Space Museum near Dulles Airport (fantastic), visited Alexandria and enjoyed being together.

Sunday the young folks flew home. Wife and I drove south to Williamsburg for the wedding and drove home Monday. 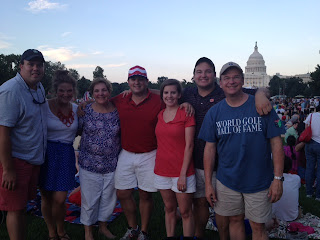 Wife and I received an unexpected blessing last weekend.

On Friday night we were invited to an impromptu "summer solstice" party. As an early onset curmedgeon, it was my obligation to hem and haw a bit about going but I had no legitimate excuse so Wife said of course we would love to come.

Daughter left to go to DSO's for the weekend. Wife and I went to eat an early dinner -- barbecue at a new place in town. We went allowing for a wait, but there was none, so we had finished eating and still had 45 minutes or so before the party.

As we were getting in the car I shared with Wife how much I was missing our "young'uns" in Dallas (Older Son, DIL and now Younger Son) and I wished we had just bitten the bullet and gone there to see them that weekend. Although we will all be together over the Fourth of July, I told her, it would have been a good weekend to go see them.

We got to the party and while Wife was mingling with some of the ladies, she called me over.

"Want to go to Dallas tomorrow?" she asked.

I looked at her incredulously, almost mildly irritated because I couldn't imagine what she meant.

I'll make it short. We have some friends, a married couple, the husband of whom has built a very successful business. He speaks around the country. He is also extremely kind and generous.

They were at this party and his wife told (my) Wife he would be leaving the next morning on his plane for Dallas for a speaking engagement there. "You should go with him!" she told Wife.

He had extra seats on his plane and thought it was a great idea for us to hitch a ride.   I sent a text message to Older Son "asking" if we could come. He said, "Come on!"  (Truth be told, I didn't exactly ask . . . )

We went. We were there 24 hours. We had a great time. Loved seeing them all.

Sometimes the best gifts come when we least expect them.