Winter not leaving us just yet -- and a few random thoughts


I'm afraid my good start on the blog this year kind of fizzled out.

But I'm back, and hopefully I will do better. I could make excuses, such as not having my personal laptop computer for the past several months which is a long story from which I'll spare you the details, but suffice it to stay I'm warming to the idea of a Mac. We will talk about that another time.

It has been a mild winter, to say the least, here in middle Tennessee. After the early January snowfall, we have hardly had freezing weather. And many days it has been just like spring.

But wouldn't you know it, just when we were about to put away winter clothes (well that's a stretch because I never store seasonal clothes, I just move the sweaters, etc. a little farther down the pole in the closet), it's winter again, just a few days before it's supposed to be spring.

This past Thursday, it was 77 degrees. An overnight thunderstorm brought in a cool front and highs Friday were in the low 50s. There was some talk of snow for the weekend but our local prognosticators talked of "conflicting computer models" and by Friday night when we went to bed, they were saying we might have a "dusting," if anything at all.

There was plenty of dust, all right, and yesterday (Saturday) morning, it was falling fast and furious. It barely hampered travel, however, and by noon it was done. By late afternoon much of it had melted away. I managed to get this shot while it was still coming down: 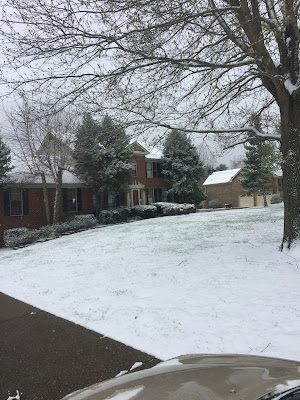 Our almost-spring snowfall served as a reminder that our weather around these parts can be pretty fickle, and it's a good idea not to get too accustomed to one way or another.

Wife and I have made some short trips over the past couple of months. She went to the beach with some lady friends in February, during which time I flew to Dallas and saw my college roommate and a cousin.

We went to Atlanta to see Older Son and DIL, and to Huntsville to see Daughter and SIL, and learn the gender of our grandbaby coming in July (it's a boy!). And one weekend we drove over to Little Rock to see Wife's parents.

We are thinking of taking a trip the week of Easter since it appears nobody will be coming here. Those plans are tentative as of this writing.

Younger Son is leaving this Tuesday and will be traveling for work in the Southeast for about three weeks. He will crash in Atlanta with Older Son and DIL for a few days. He will not make it here but, given the close proximity, we'll take the opportunity to see him. Really looking forward to that.

We sprang forward last night, one of Wife's favorite activities of the year. She loves the longer days.

Me? Not so much. I'm much more a fall and winter person than spring and summer. I detest hot weather and turning the clocks ahead is my first reminder of what is to come.

Truth be told, though, I like living in a place where we have some semblance of seasons. I don't think I would do well in an area where it was warm all the time. Neither would I cope well with long, hard winters.

Even though we have had a very mild winter, we at least know when the seasons are changing. I might complain when it's hot, but if I had to experience bitter cold day in and out for an extended period of time, I would, no doubt, complain mightily about that (not that I'm a terrible complainer, mind you).

So I'm probably just where I need to be.