People who stop by here regularly know that blog friend Kelly and I have been friends for pretty much our entire lives. We grew up together in church and school and have managed to stay in touch lo, these many years.

She and I were texting back and forth recently about different old friends and I commented on what an eclectic group of friends she has. She maintains friendships with folks from her various stages of life, including friends from our childhood and youth who were not necessarily friends with each other.

Truth be told, I'm much the same way. I have been fortunate enough to have relationships from the various times in my life -- childhood, college, law school, two summers in the mountains and various jobs I've had -- and to have maintained a number of those relationships. A number of my friends are not friends with each other, and that's OK.

This doesn't mean I'm in touch with everyone who I was ever friends with. There are some who simply have not reciprocated my efforts to stay in touch and I've accepted that. But for those who appreciate a Christmas card or occasional note, email or text, I enjoy keeping up.

And for those who seem to have dropped of the face of the Earth, I'll be thrilled if they happen to resurface. In fact, just this week I heard from a lady I worked with 20-plus years ago but with whom I had not spoken in years. It was great to talk with her.

I am not on social media, e.g. Facebook, Instagram or any of that, but through this blog I've managed to make a few friends too (as has Kelly). I really enjoy that.

Anyway, I've felt especially fortunate over the past few months to have had personal visits from a few friends from various times in my life. As I think back on those visits, I realize how different those folks are. There was one person who leans waaaaay to the left and another who leans waaaay to the right, and there are some that fall somewhere in between.

I love them all. While I used to get worked up about differences in politics, theology, thoughts on the economy and such, I am finally mature (I hope that's it) enough to not let it bother me anymore. If someone wants to engage in a discussion about any of these things, and I realize we have a difference of opinion, I'm happy to go on with the conversation, but I'm also happy to avoid those topics if things are too awkward and uncomfortable. There are plenty of other things we can talk about.

Fortunately, even with those I disagree, I can usually find some common ground. (Maybe I should run for Congress).

For the most part, if a person is kind, I like that person. Unkindness (is that a word?) is about the only thing for which I have almost no tolerance. I just don't have time for people who are not kind.

We have had some busy times since our Colorado vacation. We're either going to Huntsville (where Daughter and family live), Atlanta (where Older Son and family live) or Little Rock (where Wife's parents live).

Fortunately, Younger Son, who lives in northern Indiana, travels a bit with his job so he's able to swing by here on occasion as part of one of his trips. (I didn't want you think we were excluding him).

Wife is definitely part of what is sometimes called the Sandwich Generation with grandchildren and elderly parents.

Those parents just celebrated their 70th wedding anniversary. Wife and her sister went to Little Rock and they had a quiet celebration. We asked people to send them cards and at last count they had received 55.

70 years. That's a long time with the same person.

We celebrated our own anniversary in August (34 years), as well as Wife's birthday (XX years).

We rarely celebrate our annivesary, other than to say "Happy Anniversary" to each other, but this year, since it fell on a Saturday, I suggested we make a weekend out of it. Wife liked that idea just fine.

We both love baseball and we can be at a major league park (Atlanta, St. Louis or Cincinnati) within a few hours, but St. Louis and Atlanta both had away games that weekend and Cincinnati is our least favorite of the three, so we opted against that.

We love the mountains of Western North Carolina and it's not a terrible drive either, but would have required a little more time in the car than we wanted.

We have been through Louisville, Kentucky, about three hours north of us, numerous times on our way to other destinations, but have never stopped. After doing a little research, I learned about the Kentucky Bourbon Trail, which isn't a real trail as such, but a group of distilleries, all in or near Louisville, that have formed a loose affiliation with each other and have tours and tastings at their facilities.

So the Bourbon Trail it would be for our anniversary celebration. We left early Friday afternoon, the 10th, for Lousville.

We stayed in a part of the downtown area that, like so many urban areas across the U.S., is seeing a resurgence. There are great restaurants and interesting places to walk, and one of the distilleries is right down there too, although not one of the ones we visited.

On Saturday morning the 11th, we toured the Jim Beam distillery and purchased a commemorative bottle for our anniversary, which we watched being processed. Later that day we went to Heaven's Hill, which we did not tour, but walked around their museum a bit, and that afternoon we went to Maker's Mark.

The countryside is beautiful and the distilleries were busy, but not overly crowded. The charming little towns, all within an hour of Lousville (Clermont, Bardstown, Loretto and a couple of others we happend upon) are delightful.

Sunday morning after breakfast, we drove a couple of hours east, near Frankfort, and went to Woodford Reserve. It's located in the middle of a beautiful horse farm and is in a breathtaking setting. Because they had expererienced a bad storm the night before with some severe flooding, they were not offering tours of their facility but we were able to walk around a bit, and do a tasting, and it was definitely worth the drive.

So, do I like Bourbon? Honestly, not that much. I'm pretty much a beer and occasional wine guy, and Wife will have an occasional glass of wine and one of those fruity drinks from time to time. But as they say, when in Rome, so we tasted a number of the different offerings, which were generally quarter-ounce samples, so there was no danger of over-imbibing.

I'm still not a huge Bourbon fan, but I warmed to it a bit, and enjoyed learning about the different brands and seeing how it is made. I loved driving around to the different places and we thoroughly enjoyed Louisville.

Over part of Labor Day weekend, we kept GS1 for Daughter and SIL, who were on a beach getaway with Older Son and DIL. We had him from Thursday until Saturday, when we handed him off to his other grandparents in Huntsville. From there, on Sunday we drove to Atlanta and went by to see GS2, who was with his other grandparents. (I'll update you on the grands in a future post).

The main purpose of that excursion, however, was baseball, and we went to see the Braves play later on Sunday and again on Monday. Wife and I do love baseball. We manage to have a pretty full life during these empty nest years.

Two pictures below are from the Bourbon Trail weekend -- one is our bottle in progress, then the finished product (see the etching at the top), which we will probably still have on our 50th anniversary! The bottom photo is outside Suntrust Field, home of the Atlanta Braves. 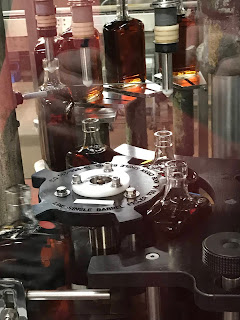 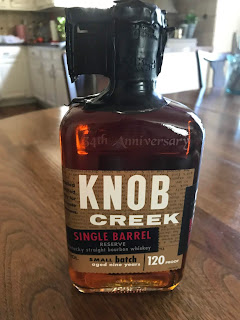 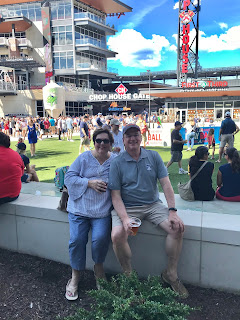