I thought I would post a link to my column from a couple weeks ago, which prompted a number of responses from local readers.

It's about the recent cancellation of my subscription to our big local newspaper from full access (print and digital) to digital-only.

I pulled the plug. I still find it sad, but I am not looking back, and I don't regret it. It was time.

This Monday, January 24th, will mark 36 years since I became a father.

I think I've previously told this story here, but the day our first was born, Wife was nearly three weeks past her due date. We had grown so accustomed to waiting, it hardly occurred to me it could happen that day.

Wife was already on maternity leave, so that Friday morning before I left for work, I asked her if she would be up for making pizza that night and we would ask our friends over to eat with us and watch "Dallas."

Because that's what you do, right? You ask your 9.5-months pregnant wife to have people over for dinner -- a dinner she would prepare. I have lived to tell this, so apparently, she agreed.

The night before, I had picked up a six-pack of Busch to chill in the fridge, in anticipation of her response. (I spared no expense in those days).

Imagine my surprise when she called me from the doctor's office shortly after lunch and said she would be giving birth that day. The doc said she simply couldn't wait any longer. Our first, known here as Older Son, was born by C-section about 5:30 that afternoon.

(Important note: I set the VCR to record "Dallas" and enjoyed the beer later. Unfortunately, Wife did not make the pizza before going to the doctor. Maybe she decided she wasn't up for it after all and would have a baby instead).

We would go on to have Daughter about three years later, and Younger Son about four years after that.

And they gave me my favorite name for myself -- "Dad." Oh my goodness, how I love being Dad.

And I didn't think I would ever love a name more than that one. That was until I became "GrandBob" in July 2017. I love being GrandBob as much as I love being Dad. Until a couple of days ago, I was GrandBob four times over.

I say "until a couple of days ago," because on that day, January 20th, Daughter gave birth to her third, a boy, weighing in at 7 lbs, 15 oz. and who will join his older brother (the one born in July 2017) and sister at home. Wife and I are now welcoming our fifth grand, and we now have three boys and two girls. Daughter's family replicates our -- boy, girl, boy -- but hers are a little closer together in age.

This birth was more difficult for Daughter than the other two, and she ended up having to have an emergency C-section after laboring all day. She's doing OK, but her recovery will take a little longer than with her previous births, and that's a bit of a shock to her.

But she will recover and, I pray, the discomfort will become a distant memory.

I've not yet met my new grandson in person. Wife went to Huntsville (a little less than two hours south of us) and has helped with the older two. I'll give them a few days to get settled at home.

We are thrilled to welcome David Walter ("Walt") to the fold, and we're thanking God, from whom all good gifts come, for our newest family member. 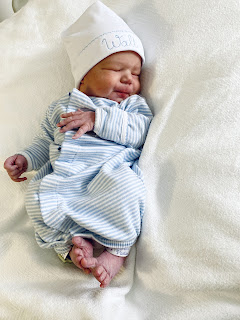 We had another big snowfall after I published the picture in my previous post. About seven inches accumulated on our back deck.

Since I work from home and driving is not generally necessary, it does not bother me and, in fact, it's beautiful to watch from the window of my home office.

More is predicted this weekend. This is crazy. We are not accustomed to this much snow around these parts.

And considering how warm it was at Christmas and New Year's, with highs in the 70s on both of those days and during the week in between, it's hard to believe we're now experiencing cold and precipitation more like that of my friends up north.

Speaking of Christmas, this year we continued our custom of an international Christmas Eve (although we pushed Christmas Eve to December 26th), with this year's country being Ireland. It was delightful as usual.

With the warm weather, we started with happy hour outside before coming in for seafood chowder, Irish beef stew and Irish soda bread. A bread pudding with whiskey sauce rounded out the delicious meal.

The decorations were fun, as usual: 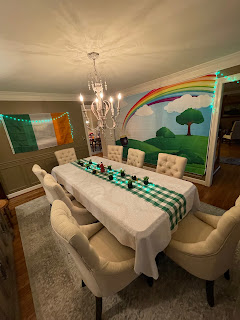 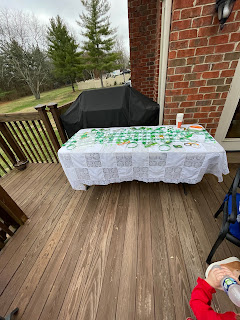 I hope to have more to post about than the weather as the year progresses, but here is what I have experienced the past three weeks:

-- Going to the basement twice to take cover from storms.

-- Temperatures in the mid-70s Christmas Day.

-- Spending a major part of our holiday celebrations outside.

-- Wearing shorts every day since mid-December until yesterday.

-- This morning, waking to this: