As promised, I am posting my favorite books of 2016. Today are my non-fiction favorites, and in a few days I'll post fiction.

I read 30 books this year, eleven of which were non-fiction. Just as I don't set out to read a certain number of books, I don't purposely set a number of non-fiction vs. fiction. I just read 'em as they come.

Here are my top six non-fiction for the year, in no particular order:

1.  Destiny and Power, by Jon Meacham. This was the first book I read in 2016, by historian and fellow Nashvillian Meacham. It's the story of the Bush family, the one the two presidents came from. I love reading about politics, especially the inside and background stories, and this one certainly did not disappoint. As I recall, it goes back a couple of generations before George H.W., and it's a fascinating read about a fascinating family. Although some might call them privileged, which might be hard to argue with, it's also hard to argue with the sense of honor and service that permeates the family tree.

2. Jesus Outside the Lines, by Scott Sauls. Sauls is the pastor of Nashville's Christ Presbyterian Church, and is a protégé of Tim Kellar, pastor of Redeemer Presbyterian in New York City. I loved this book, in which Sauls makes the case for Christians finding common ground rather than maintaining an "us vs. them" mentality, while challenging them to stand strong in their faith without compromising. I highly recommend it.

3. Bare Bones, by Bobby Bones. There's a pattern here -- this is another book by a Nashville resident. Bobby is a local morning DJ, and I have been listening to him for several years. He and his thirty-something  crew are on one of our country radio stations, and the show is syndicated nationally. I was drawn to it because of the funny interaction among them, and I noticed early on how clean the content of their program is and the positive message conveyed, with segments such as "Tell Me Something Good."  When I heard about his book, I thought it would be interesting reading because I enjoy the show, but I was surprised at how much I really enjoyed it. Bobby tells the story of his growing up years -- born to a teenage mother in a small Arkansas town with a father who left them early on, and traces his path to success. He gives credit to coaches, teachers and friends who took an interest in him and helped him reach his goals.

4. When Breath Becomes Air, by Paul Kalanithi. If I could make you read one book on this list, it would probably be this one. A young neurosurgeon writes a poignant account of dealing with an illness that will ultimately take his life. That's right, you know the outcome before you finish, but his narrative is riveting, first, because of his medical knowledge of what is going on inside his body, which he is able to share with the reader in a highly understandable manner; and second, because of the vulnerability and honesty with which he tells the story. Given the subject matter, you can't be surprised at how it will mess with your emotions, but I promise it's worth the tears.

5. Being Mortal, by Atul Gawande. I reviewed this book in one of my weekly columns and posted it here in June, so I won't go into great detail.  Gawande, a general surgeon of Indian descent, presents a compelling case for an end-of-life experience that preserves the dignity of the person, whether elderly or younger. I learned so much from this book and would recommend it for anyone facing end-of-life or near-end-of life decisions -- whether it is yourself or a family member. Even if you're not yet faced with those decisions, chances are very good that you will be one day, so it would be worth your time.

6. Seven Women, by Eric Mataxas. This is a follow-up to Mataxas's "Seven Men" which I read a couple of years go. The full title is "Seven Women and the Secret of Their Greatness." Metaxas writes a brief biography of each of the women (which include Joan of Arc, Susannah Wesley and Rosa Parks) who in many ways helped shape history. I'll leave you in suspense about the other four and would strongly suggest your purchasing a copy of this book or checking it out from the library to find out, and then, of course, reading it. I'm sold on Metaxas as a writer, and this one continues the excellent style for which is has distinguished himself.

That's it for now. See you in a few days with my fiction picks for the year.
Posted by Bob at 4:35 PM 4 comments:

Well it's been a while.

My last post was the day after the election and I did not even comment on it. I think I was still too much in shock.

After a month, I'm starting to accept the fact that Donald Trump will be president. I did not vote for him, but all I can do now is hope for the best. I'm so-so with his cabinet picks thus far.

He still acts very un-presidential as far as I'm concerned and often still carries like he is in campaign mode. I shudder to think how he'll conducts himself as POTUS.

But I have way too many important things to occupy my mind.

I don't necessarily like it, but I'm moving on with things.

We had a great Thanksgiving at our house, with a total of 12 at our table. Wife, as usual, put on a feast worthy of royalty and that's what we ate like. Older Son, DIL and I ran a 5K "Turkey Trot" that morning, hoping to offset some of the calories in advance.

I don't know if that happened or not, but it didn't hurt.

Now we are in the midst of Christmas preparations. I don't shop, but Wife tells me hers is all done. She has been incredibly efficient recently, e.g. setting the Thanksgiving table more than a week in advance because she knew she would be out of town the weekend prior, having all the Christmas shopping done and most of the gifts wrapped by December 1, etc.

I asked if perhaps she were about to leave me, but because of her merciful heart wanted to assure I  be prepared.

She said no, but I've still been on my best behavior.

I'm sharing a couple of photos.

The deer have been in abundance this fall. This picture is from our front yard a few weeks ago.

The other is our Christmas tree, which we finished decorating yesterday -- with a minimum of stress, I might add.

I'll be back soon with my favorite books of 2016. Happy Holidays to all. 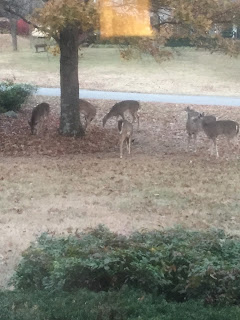 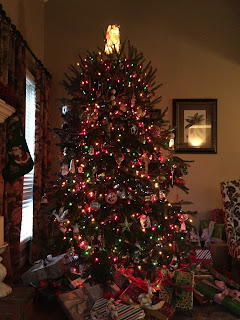