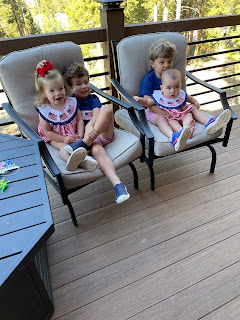 It really was a grand summer vacation with the family.

With four little ones, it was not what one would call relaxing, but we knew that going in.

With 12 humans, four of which are four and under, going out to eat with everyone was not going to happen. So, except for "sibling night," when Wife and I kept the grands and let the young adults go out, we all ate in every night, and everyone was assigned a night to cook.

It worked out beautifully. The respective chefs were creative and resourceful, and we had some delicious meals.

There were various hikes, a viewing of Breckenridge's July 4th parade, a lot of hanging out on the back porch where there was a wonderful view, and various side trips taken by different members of the group. My favorite day was Wednesday, when Daughter and her family, Younger Son, FDIL and I made a drive over to Rocky Mountain National Park, one of the prettiest places in the world and where I worked the summers of 1980 and '81.

(As Wife has said, I never really got over it. And I'm afraid she is right).

The guys and I went fishing on Thursday, which was not nearly as successful as our excursion on the same lake in 2018. That was also the day there were two Emergency Room visits, so that might have also put a damper on things. But a day, or half-day, on a lake in Colorado is still a good day.

It was warmer in the mountains than I have ever been, although still glorious compared to our southern summers. Highs during the day crept up into the high 70s (I know, cry me a river), but there was virtually no humidity, so we could hardly have described it as hot. I don't know if this is the result of the western heat wave, global warning, or what, but I hope it was a fluke and not a trend.

Wife and I have a trip to Maui planned for early October, just the two of us. She's determined we will return to pre-COVID travel, and she will take me with her when I'm available. For now it's back to work.

(Attached pic if of the grands July 4th).

I'll post details on our vacation in my next installment and will use this one to tell you about our air travel.
We were able to pay for nearly everyone's airfare on this trip with credit from canceled trips during the pandemic. We had to kick in a little ourselves, but not much when you consider we had 12 humans traveling.
There was a time when I did not mind flying and there was even a time I rather enjoyed it. Not anymore. From parking at the airport, to going through security, to being squeezed into seats that have enough leg room for less than average sized folks, it's not my thing.
But it's a means to an end. I am married to someone who loves to travel and she often wants to take me with her. Since I still work, a long road trip is generally not in the cards. So we fly.
And this trip was my idea. I love the Colorado mountains in the summer. Again, I didn't have time to drive, so I sucked it up and got on a plane.
The flight to Denver to eventually meet up with our family for a week was my first one since before the pandemic. It had been about two years.
Things were not that different, except for wearing masks in the airport and on the plane. And food and drink service is condensed, to say the least.
But it's still stuffy and crowded, no different from previous flights.
Wife and I had a direct flight from Nashville to Denver the afternoon of Thursday, July 1st. It was supposed to be about two and one-half hours.
But when we got to within 30 minutes of landing in Denver, the pilot advised us we would have to circle for a little while because, due to storms in the area, there were a number of planes "backed up," needing to land, and we had to wait our turn.
About 30 minutes after that announcement, the pilot advised we needed fuel (which I always love to hear from a pilot), and we still could not land in Denver, so we would go to Albuquerque.
To summarize, we landed in Denver about five hours later than scheduled. We were supposed to meet friends for dinner, and they were kind enough to postpone our original meeting time. We still made it, going straight from the airport to meet them, and we pretty much changed clothes in our rental car (don't judge me).
Younger Son and his fiance had even worse luck. Their direct flight from Birmingham, scheduled to leave at 6:30 p.m. Friday, July 2nd, didn't leave until well after midnight. They arrived at the Denver hotel where we were staying around 3 a.m.
They had similar (bad) luck going back on Saturday, July 10th. Their flight connected in Las Vegas, and the plane from Vegas to Birmingham had a flat tire. Everyone on the plane had to de-board while it was repaired, and it was another red-eye flight for the two of them.
The good news for them was they each received $200 in flight vouchers from the airline for their trouble (100 for each trip), so they have a start to their honeymoon fund (assuming they go somewhere that airline flies).
The rest of the family had relatively easy flights going and returning, as did Wife and I on our return flight.
As I said, it's a means to an end, and I suppose, considering people are back to flying in droves, all things considered, the airlines do a pretty good job of getting travelers safely from place to place. Sometimes there will be delays and I get that.
But it's still not my preferred method of travel.
Posted by Bob at 9:40 PM 5 comments:

We just returned from one of my favorite places in the world -- the mountains of Colorado.

For the second time in the life of our family, we rented a house in Breckenridge for a week. It was crazy and chaotic, and there were two Emergency Room visits (everyone is fine, thanks), but it was also glorious, beautiful and crazy fun.

There were three more humans in the group than the last time we went, in 2018 (see previous reference to crazy and chaotic). Accordingly, we have learned to manage expectations, as well as to expect the unexpected. Getting all 12 from one place to another is not unlike herding cats.

Wife and I flew to Denver a couple of days ahead of everyone arriving and visited two different longtime friends. The calm before the storm, if you will.

There were flight delays and rental car mishaps, but eventually we were all together in the aforementioned beautiful setting. I'll post more about the trip in the next few days. For now, I'll share a pic from one of the days we successfully herded the cats into one place -- this time for a family hike. 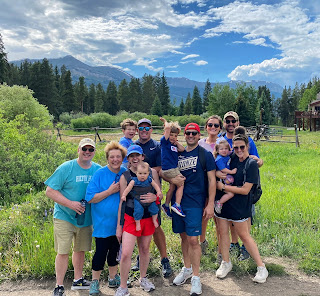