What are you supposed to say to the person who is preparing a holiday meal for you? No, you simply MUST prepare turkey and dressing, just as you did just a few weeks ago atThanksgiving?!

We all thought the idea of Mexican food on Christmas Eve was splendid, so we heartily said yes. To add a festive element, we strung pepper lights in the dining room and played "Feliz Navidad" on repeat! We enjoyed tacos, rice and beans, and chips and salsa and had a grand time.

And it was such a hit that a new tradition was born. Since that year we have had Christmas Eve dinners with Greek, French, Asian, French, Caribbean, German, British and Brazilian themes.

It has become much more elaborate since that first year, with not only food but decorations in keeping with the theme of the year. Costumes are optional.

Since Christmas Eve 2017 was the tenth year for it, we had a "Festival of Nations" that included favorite menu items from each of the nine international dinners we have had. Wife pulled out decorations from each year and a few pulled together costumes.

Of course this year we had two babies in the mix, which changed the whole dynamic of Christmas itself. We look forward to telling them stories of their first international Christmas Eve.

It was another grand time and it was fun enjoying some of the delicious foods we had over the years. We have not yet decided which country or region will help us start the next decade of Christmas Eve dinners, but I'm sure in a few months Wife will start planning.

Here are a couple of photos from a Festival of Nations, including one of the menu so you can see what we feasted upon. Until next Christmas Eve! 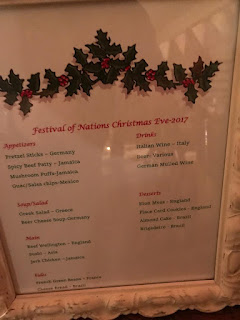 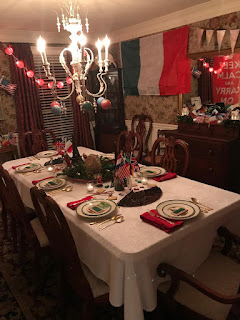