I don’t care for the term “bucket list,” the overused two-word combination that became a thing after a movie of the same name, starring Morgan Freeman, was popular a few years ago.

It’s supposed to indicate something you want to do before you die - or “kick the bucket,” hence the name. In its overuse, it has become a bit trite, as in “getting my nails done” is on my bucket list this week.

The meaning has become watered down as it has joined the ranks of cliches and buzz words.

BUT ... while I will not participate in a discussion about bucket lists, there are without question places I want to go and things I want to do while I still can.

I got to do one of those last week, on the day that just happened to be my birthday. I went to a postseason major league baseball game. For you non-baseball fans, that’s a playoff game leading to the World Series after the regular season is done.

I won’t go into all the details of how it came together, but last Thursday, Wife, Younger Son (who was home for a week) and I flew to Houston for Game 5 of the American League Championship Series. After Houston, my favorite team since I was eight years old, won the World Series last year, I told Wife I would do my best to go if they were in postseason in 2018. They won their division and they won the division series.

With the way the Boston Red Sox played all year, I knew better than to count on a World Series game for the Astros this year. So we went to Game 5 and, other than the outcome (the Red Sox won, and won the American League pennant), it was everything I hoped  it would be. Tonight as I watch Game 2 of the World Series between the Red Sox and the Dodgers, I’m thinking back on that special night last week.

I’m low key when it comes to birthdays, but this one was special.

Who knows if I'll ever make it to a World Series game, but making it to this one will always be a good memory. . 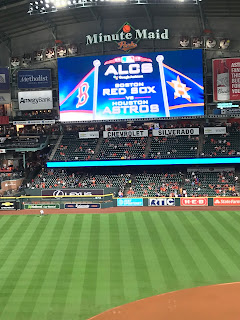 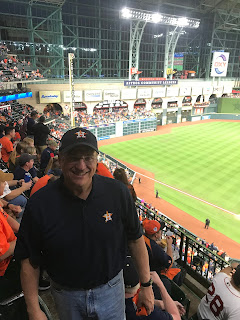 I have been meaning to write something here about the recent Supreme Court nomination. Instead, the subject made it to the weekly column I write for a local publication. Thought I would share that here too:

I received three emails  from readers after this ran Monday, Oct 15.  It’s always surprising to me how people perceive things so differently. One reader said I did myself a disservice and “lost many readers” by accusing the Republicans of staging a political ploy when they stalled the nomination of Merrick Garland in 2016. Another said my analys was fair and reasonable, which she found “refreshing.”

The most detailed email is probably the first hate mail I have ever received. Claiming I had an “obvious (right leaning) political bias” I was “trying to cover up,” he asked if I had “a shred of morality or integrity left.”

Wow — as I told him in my very polite response, I was making some observations and still feel pretty conflicted over it. And I told him morality and integrity are two qualities I strive for.

Oh well. If I put myself out there, I’m bound to have someone take me to task. And I can live with that.
Posted by Bob at 11:39 AM 5 comments: