It was another international Christmas Eve for our family recognizing the 14th country or region since we started this wacky tradition. This year it was Canada.

With our three adult children married and with our now having five grandchildren, we are flexible with our dates. As we have done for the past couple of years, we pretended Christmas Eve was Dec. 26th and Christmas Day the 27th.

It was our 15th time to do it, but a few years ago, for our tenth year, we had a "festival of nations" in which we celebrated the nine previous countries. So, this was our 14th country.

Canada was great. We started with poutine, which Wife said was the recipe that popped up most often when she searched for native Canada dishes. It's French fries topped with cheese curds and gravy and although I politely refused, I pulled out some of the fries, which we made ourselves, and they were delicious.

As usual, we started with appetizers and drinks in the entry hall. This included the poutine, Labatt Blue beer and a signature drink Wife prepared.

For the main meal in the dining room (see below), we had lobster rolls, a mixed vegetable dish called hodgepodge, Canadian baked beans and a pita sandwich for which Wife made an intricate meat mixture. There were a couple of delicious desserts.

Dress was heavy toward the "Canadian tuxedo," which is denim on bottom and top. And of course, the dining room was decorated in a Canadian theme.

It was another great time, and we'll soon start thinking about next year. 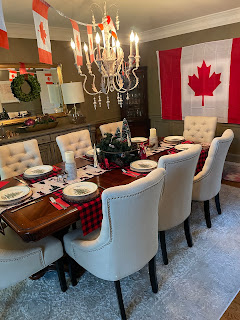 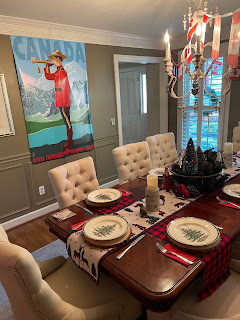 With no further ado, here is my reading list from 2022 (marked F for fiction; NF for nonfiction):

6.    Whistling Past the Graveyard by Susan Crandall (F)

24.    A Trick of the Light by Louise Penny (F) (Inspector Gamache Series)

33.    Vacuuming in the Nude: and Other Ways to Get Attention by Peggy Rowe (NF) (Audiobook)

It was a good reading year. I know this is shorter than some of your lists and longer than those of others. My TBR is as lengthy as ever and I am often adding to it. With a day job and other things going on, I am doing OK keeping up with one of my favorite hobbies. I have no doubt I will die while still having a long TBR list.

I am not going to review or even summarize any of the titles but will tell you my favorite non-fiction were Jesus and John Wayne; The Coddling of the American Mind; and Where the Light Fell. Also, I finally read Truman Capote's In Cold Blood, which I believe is categorized as a "non-fiction novel" because Capote chronicled a true event while taking some liberties with conversations among the characters.

I also loved Vacuuming in the Nude; and Other Ways to Get Attention by Peggy Rowe, mother of Mike Rowe, host of the podcast "The Way I Heard It" (and a book of the same name) and the television shows "Dirty Jobs" and "Somebody's Gotta Do It." This is the first book I have listened to in many years and did so because Mike posted the chapters two at a time on his podcast. It was read by the 84-year-old author, and it was delightful.

On the spiritual side, in addition to Where the Light Fell (Philip Yancey's autobiography), I also thoroughly enjoyed Eyes to See, I Guess I Didn't Learn That Yet and Beautiful People Don't Just Happen.

I have now referenced more than half of the non-fiction books I read this year. The fact is there is not one I did not like, and I would recommend all of them.

As for fiction, I started two new series: William Kent Krueger's (author of Ordinary Grace and This Tender Land, standalone books I have greatly enjoyed) Cork O'Connor series; and C.J. Box's Joe Pickett series. I also continued Louise Penny's Inspector Gamache series. She continues to write them, so who knows if I'll ever catch up?

Believe it or not, I had never read The Godfather until this year. I am still yet to see the movie, but I plan to do so as soon as I can. I very much enjoyed the book.

I have been advised that anything older than 50 years is a classic. If that is true, then The Godfather fits in that category (as does In Cold Blood). I won't debate it, but to be certain I had a true classic on this year's list, I read Jane Austen's Persuasion, one of Wife's book club picks, and I liked it more than she did.

Top picks from this year's fiction, in addition to The Godfather, would be The Last Green Valley, Serena and The Wonder Test.

If you see something of interest and you would like more information, send an email and I'll be happy to elaborate on any of the titles. The only one on the list I did not care for was Savage Run, the second in the Joe Pickett series. For some reason I got bogged down in the details and struggled to finish it.

However, I decided to give number three, Winter Kill, a try, and I was pleased to find it just as captivating as the first one, so I will eventually continue with this series.

As always, let me know if you like or dislike anything on the list. I would also enjoy knowing your favorites from this year.

In the meantime, Merry Christmas and Happy New Year!  I'll be back here in 2023!

Unless something of monumental significance happens between now and December 31st, or I end up with some excess time on my hands (not likely), I plan to close out the year on this blog, as I have done for the past few years, with my fiction and non-fiction reading lists. Before I do that, I thought I would do a quick recap of the year. I'm in a rare pensive mood, so it's appropriate.

Our fifth grandchild was born in January, a boy, to Daughter and SIL. They have replicated the family in which Daughter grew up -- two boys and a girl, with the girl in the middle. Life is busy for this young family and with them less than two hours away in Huntsville, we delight in seeing them often.

Younger Son married in April, and we are three-for-three in the in-law department. They plunged into married life, buying their first home and each of them changing jobs within a few months of their wedding. They are two and one-half to three hours away in Birmingham, depending on traffic, so as we often tell them, "We can be there for lunch or dinner!" My company's main offices are there, so I make the occasional trip there and can check in on them.

Older son and DIL1 continue with their busy lives in Atlanta, with a five-year-old son and two-year-old daughter. They are about four hours away. It's not a terrible drive but, for some unknown reason, traffic in Chattanooga, which is right on the way, sometimes comes to a standstill.

The boys and I had a great trip to Phoenix in July, marking another MLB park (Chase Field, home of the Arizona Diamondbacks) off the list. It was a good baseball year for me overall, for that matter. In addition to the trip to Phoenix, I saw the Astros and Nationals play in D.C. in May; the Braves and Marlins in Atlanta later in May; the Braves and Cardinals in St. Louis in August; and of course, the Astros and Phillies in the World Series in Houston in October (oh my goodness, I'll never get over that one).

Of course a major highlight of the year was our trip to the U.K. and France in September which I recounted here a few installments ago. I'm lucky to be married to someone who takes me to cool places!

My relationship with the publication where I wrote a column for 11-plus years came to an unfortunate end in August, for reasons that remain unknown to me, at which time I moved it over to Substack. So far, so good, and I'm appreciative of each subscriber.

Wife and I lost a longtime dear friend, part of our friend group from our years in Little Rock, to cancer in November. He and his family were a demonstration of strength and grace throughout his illness and the way he lived his life will always serve as an example to us. When we went to the memorial service, we saw people we had not seen in many years -- in some cases 25, which is how long ago we moved away -- and we were reminded how blessed we are with the heritage of relationships we have formed over the years.

I continue to work and have no plans for retirement -- not now, anyway. There are days when I think I would like to be done, but the days I am happy to still be gainfully employed far outnumber them. I have a great gig -- 100 percent remote. I have a great, supportive manager and three competent professionals who report to me.

Along those lines, when people ask me about working from home, I tell them I would not want to do this if I were 20-30 years younger. But in the sunset of my career? It is pretty close to perfect.

As I said, I'll be back with my year-end reading lists soon. As usual, the TBR is long and gets longer, but I managed to get to some good ones on the list this year.

Oh yeah, for longtime readers of this blog who are aware of our international Christmas Eve tradition (although our Christmas Eve is now usually observed December 26th), this year is Canada. I'll try to post some pictures in January.