Off to a good start

Last year was a good one on the blog and we're off to a decent start this year.

I am sad to report I cleaned up the blog list over to the right, and took down some friends who had not posted in two years or more (and one of whom, sadly, passed away). There are some who are becoming more infrequent, but I've kept them on the list for now. I've prodded a couple with emails, telling them I hope they will rejoin the blog world, but assuring them I completely understand if they don't. I mainly wanted to tell them they had been thought of. To everything there is a season . . . and I get that.

I am pleased to have added several -- Ed, Vince, Sage, Kimberly and Bone, all of whom, like the others on the list, write beautifully of interesting events in their lives; or share about books they have read; or voice an opinion about something; or post a photo or two. I am enlightened and enriched when I read their posts, and appreciative of the time they take to share.

What it comes down to is how much I love storytelling -- both the telling (writing or, in some cases, photographing) and the hearing (reading) part, and that's what keeps me grinding out the occasional tale here, and returning often to see what my friends have posted.

I still shy away from what has become known as social media -- Facebook, Twitter, Instagram, Pinterest. I guess this is some form of it, but I think it suits me better than any of these others.

I had a few things to say about last year's election, and I assure you I am none too happy with the result.

But as the stages of grief go, I think I have arrived at acceptance, and I'm not going back to any of the others. I am still extremely skeptical of a Trump presidency but it's off the list of things I'm going into apoplexy over. Just not worth it.

I trust 2017 is off to a good start for all of you and I look forward to meeting you here, and on your blog pages, for more storytelling.

It was our ninth annual international Christmas Eve at our house just a few weeks ago.

That's right, for the past nine Christmases, we have chosen a country or region for our Christmas Eve dinner and had food, dress and decorations in keeping with the theme.

It started the year Wife, who felt she had just finished preparing Thanksgiving dinner (turkey, dressing, etc.), asked if anyone would object do doing something a little more non-traditional for our food at Christmas.

We ended up having a Christmas Eve dinner of Mexican food, a Christmas morning breakfast/brunch that I prepared and, later in the day, a fairly simple -- but delicious, of course -- Christmas dinner.

We all decided we liked this just fine. But we especially liked the Christmas Eve Mexican food, made more festive by stringing pepper lights in the dining room and playing "Feliz Navidad" over and over . . . and over.

A new tradition was begun, and since that year, we have had Italian, Greek, French, Asian, Caribbean, German and British Christmas Eve dinners.

It has expanded greatly, and Wife has outdone herself with food and decorations in keeping with the year's theme. We have an inventory in the basement of each year's props, and there is talk that one year we'll have a "festival of nations" where we'll pull it all out and have samples from each year!

This past Christmas Eve was Brazil, and it was another grand occasion. Wife chose the "Carnival" theme for decorations, and costumes (which are optional) included a Carmen Miranda look-alike, an Olympic 2017 athlete and some other Brazilian-themed adornments. At the table, as you'll see below, Wife provided a mask for each person.

Wife chose food similar to what one might find at a Brazilian steak house. I grilled an assortment of meats and there were various salads, vegetables and desserts.

For the past three Christmases, we have had our Christmas Eve dinner as usual. On Christmas Day the married ones have gone to the respective in-laws' homes, then we have come back together on the 26th to have our Christmas celebration.

And speaking of change and growth, we learned just before Thanksgiving that we will become grandparents in 2017!  Daughter and SIL are expecting in July and we are over the moon!

Our Christmas Eve  was great fun, once again, and a tradition we hope to continue.

Here are some highlights from Christmas Eve 2016, and a family picture outside on a very balmy December 26: 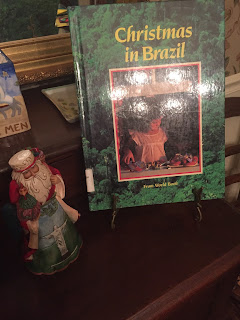 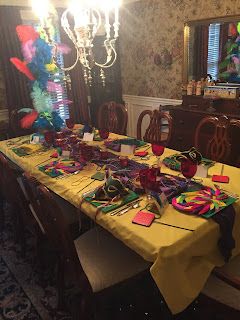 The table, with a "Carnival' theme 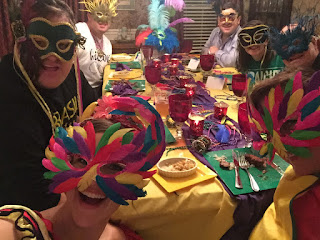 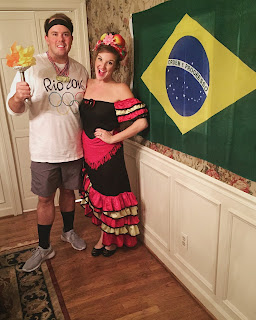 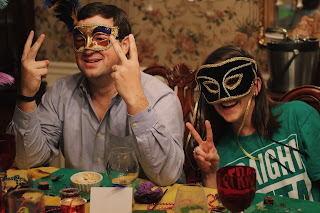 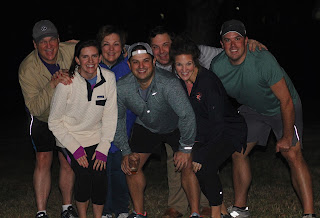 Everyone outside on the 26th

Before we completely turn the page on 2016, I'll list my top fiction books of the year, in no particular order:

1. The Whole Town's Talking, Fannie Flagg. A master storyteller, Fannie Flagg is back with more stories that weave into one delightful tale of the goings-on in Elmwood Springs, Missouri (and in its cemetery -- you'll have to read it to understand). Readers of her other books will recognize a few of the characters, but this is a fresh and funny story that will grab you from the first page even if you have not read any of her others.

2. The Swan House, Elizabeth Musser. Another I picked up off Wife's ever growing stack on her bedside table, this coming-of-age story about a teenage girl in Atlanta in the early 60s is the last book I read in 2016. Told in first person, the main character deals with questions of prejudice and faith, making hard decisions about life and friendship. When I read fiction, I am looking for a good story in which I can lose myself. When the writing is beautiful and it makes me think, those are added bonuses. Both happened here.

3. Gone With the Wind, Margaret Mitchell. I reviewed this in my weekly column and posted it here a few months ago, so I'll not say a lot more. If you grew up in the South, the book will probably mean a lot more to you. If you didn't, it is still a masterpiece. Ignore the political incorrectness of the time and enjoy it for what it is. (Thanks, Kelly!)

4. Circling the Sun, Paula McLain. I reviewed this one here a few posts back. It's historical fiction at its best, told from the point of view of Beryl Markham, a farmer/horse trainer/pilot who lived ahead of her time.

5. The Paris Wife, Paula McLain. Obviously, McLain is a new favorite of mine. Another historical fiction piece, this one tells the story of Hadley Richardson, Ernest Hemingway's first wife. It's a fascinating story in which you will learn much about Richardson and her life with the quirky and eccentric Hemingway, as well as Hemingway himself.

6. Glory Over Everything, Kathleen Grissom. The sequel to "The Kitchen House," Grissom continues the story of  characters fighting for freedom.

7. The Woman Who Walked in Sunshine, Alexander McCall Smith. The latest in "The Number One Ladies Detective Agency" series, it is incredible how Smith writes each of these books in a fresh, new way that captivates me as if it were the first one.

8. The Second Coming, Walker Percy. A friend challenged me to read something by Percy, and I took her up on it. It's not easy reading but it's worth the effort. This tale of an unlikely friendship between a widower and a young woman who recently escaped from a mental institution takes concentration and is at times perplexing, but the poignant story that evolves left me enriched and richly satisfied. If you read for pleasure, but enjoy something a bit outside your routine, this would be a good one to pick up.

I'm looking forward to more good reading in 2017 and welcome your recommendations. Happy reading!
Posted by Bob at 6:41 PM 3 comments: