Toys of the times

I received some fun feedback from this column I wrote earlier in May:

I am not sympathetic with folks who go on and on about how busy they are.

That's mainly because I have found most of them are busy doing things they CHOOSE to do. In my estimation, if you are engaged in elective activities, you don't have grounds to complain.

You might be tired, and I get it, and if you want to talk about that in simple, everyday conversation, I'm here for you. But complaining, when you have control over your schedule? Not so much.

So today, since it has been a while since I have posted anything here and I still like to keep at least a small presence, I won't tell you how busy I am. I am tired, yes (although I got good rest last night and feel much better), but it's from doing things I have chosen to do and things I enjoy. I've been busy, but I am not complaining about it.

Wife and I made a quick trip over the weekend and managed to fit much into a short period.

We flew into Washington, D.C. early Friday night. We rented a car and drove to Alexandria, VA and attended a small family event hosted by Wife's nephew and his wife. They got married in March in a  small family ceremony in California and chose to celebrate with family and friends this past weekend in the area where they live.

We had nothing planned during the day Saturday, so drove into D.C. and strolled around the National Mall. I am lucky enough to have visited Washington numerous times, but I never tire of seeing the sites there. We walked around the Washington Monument and took in the views looking one way toward the Capitol, and the other toward the Lincoln Memorial and beyond toward Arlington Cemetery. We also visited the World War II Memorial for the first time.

We had learned it was a free self-guided tour day at Washington National Cathedral, so we visited it in the early afternoon. I only remember going there once during my previous visits to Washington, so it was nice to walk through it again. Its Neo-Gothic architecture is reminiscent of much older structures in Europe.

The wedding reception was that night at a restaurant back in Alexandria. We had brunch Sunday morning with Wife's sister and niece.

Sunday afternoon we went to Nationals Park and saw a game between the Washington Nationals and Houston Astros, my favorite MLB team (I might have mentioned this in the past!). It was a great day for being an Astros fan, as they won 8-0 and had four home runs!

It was an early morning Monday, waking at 4:45 a.m. to get to the airport for a 6:50 departure. With the time change and the flight being on time, we were back in Nashville at 7:45 and I was working at my desk by 9.

The early morning departure was a killer, especially with my having to start work as soon as I got back.

So yes, I was tired. I'm still a bit tired (but much better). And this is one of several activities during a particularly busy few weeks.

But we had a great weekend, and you won't hear me complaining about being too busy. I can cut back if/when I want to. And how often do I get to do this on a Sunday afternoon? 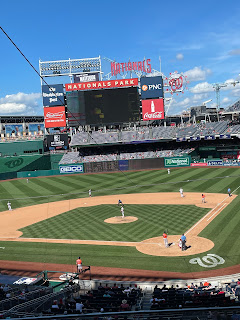