I  love old wood furniture. It's something instilled in me by my late mother.

She would buy old pieces at flea markets, estate sales or garage sales that sometimes looked like junk. Well, sometimes it was junk, but she would buy it anyway. The junk would eventually end up in a garage sale of her own, or would get passed on (sometimes to me, and I would promptly dispose of it -- I didn't want her junk, either!).

For the non-junk, however, she would strip, sand and refinish. With a couple of exceptions, I haven't gotten into that, but maybe someday.

We have a number of my parents' old pieces in our house. Some of it has been so old that it hasn't lasted, and although there's a twinge in my heart to do it, I'm more willing today to get rid of it than I used to be.

The value is mostly sentimental. I look at our kitchen table and chairs, which my mother bought second or third-hand (or even greater-hand than that), and I hear its creaks, and I think of her. I don't think it will last forever, but it serves us well for now.

There are a few things that are genuine antiques, like the corner cabinets in the dining room and the secretary in the family room.

You may not be familiar with the term secretary other than as what we used to call administrative assistants who traditionally typed and filed. I started my working life long enough ago to still work with them and was lucky enough to have one a few times, and let me tell you, they were underrated.

But that's not what I'm talking about today. I'm talking about what is generally an upright piece of furniture that has a fold-out platform that serves as a desk, drawers below and a glassed-in cabinet above. Many of them also have wonderful little slots and nooks and crannies perfect for holding important (or not so important) papers.

The one we have in our family room was in my parents' home, and in my grandmother's home before that. It is made of walnut and it is a gorgeous piece. I have no idea what it might be worth, perhaps not that much, but it doesn't matter because I will never get rid of it. If the time comes that we downsize, I'll pass it on to one of my children and if none of them wants it, I'll shame one of them into taking it. One of them needs to have it and think of us when they see it and I'll tell them that if that's what it takes.

After Wife's parents passed away in November, we eventually had to go to their place and decide what to do with their belongings. They had gone through a significant downsize of their own a few years ago and had moved into a two-bedroom cottage in a retirement community. They had, however, kept a fair amount of the furniture from their house.

There was not much of that anyone wanted, with everyone (Wife and her sister and their respective families) living a considerable distance and the logistics of getting it being tricky. We were able to consign most of it out to a sale and auction company.

There were a few pieces, however, that we earmarked for Younger Son for his bachelor apartment, and I agreed to put them in storage in Little Rock for a couple of months, retrieve them for him later and deliver them to him in Birmingham. There was also a piece I wanted: a secretary.

It's smaller and sleeker and a lighter color than the one we have from my family, but like the one we have, it's beautiful. I had always admired it and always secretly hoped we could get it someday.

I'm pleased to say I now have it. Since I work from home now, it was the solution to a dilemma I've had for nearly a year regarding where I work. It's ridiculous, with only Wife and me in this sprawling house, that the only place I could find was our walk-in closet. But for reasons I won't go into, that has been the case. And although I've managed, it has not been optimal.

But now I have this lovely piece - a secretary with its intricate features and myriad compartments. It's in one of the bedrooms and takes up very little room. I put my little collapsible computer table next to it at a right angle, and I have an office that is all mine -- just what I need.

Best of all, I feel two people with me who I dearly loved. I hope they love that I'm using it. I'll take good care of it and if I have to, I'll shame one of my adult children into taking it one day. Guilt is a great motivator.

Here it is, right after I got it, closed up, and then being used to its pull potential. (Thanks, Billie and Walter). 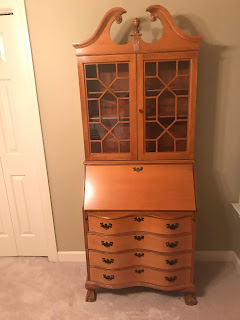 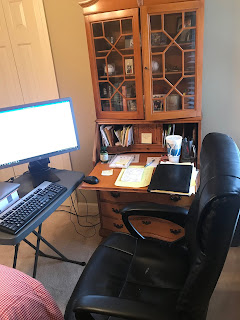 My post earlier this week, asking if you thought you would live to see a president of the U.S. trying to persuade a state official to change election results so the votes would appear to be in his favor?

I hadn't seen anything, had I?

Did you ever think you would live to witness a President of the United States try to pressure a state official (the Georgia Secretary of State) into changing election results so said president (who, two months after the election and two weeks before he has to leave office whether he likes it or not) might be able to overturn the will of the people?
Or did you ever think you would live to witness a President of the United States say he is counting on his vice president, who will preside over a joint session of Congress tomorrow to confirm the Electoral College votes, as set forth in our Constitution, to disrupt the process so that the Constitutional process, not to mention democracy itself, are thwarted?
I have been patient with Trump supporters. I've told myself they follow their consciences just as I do. But how do you support this? It's a question I would like to ask the two senators from my state (I refuse to call them "my" senators) who have pledged to disrupt the process tomorrow, which has firmly assured I will never cast a vote for either of them.
It's about so much more than Democrat or Republican, liberal or conservative.
I've seen a lot in my life. But I've never seen anything like this.
Posted by Bob at 5:03 PM 5 comments: