Anyone who has stopped by here with any regularity over the past nine years knows I'm a reader.

As I've said before, I don't set goals about what I read. I just read whatever I might have heard about, or often, something Wife has passed on to me. She and I like most of the same things, although not always. She has never gotten into the Mitford series, which I love, and I'm not a fan of James Patterson (one of her guilty pleasure authors).

We both love John Grisham and we both have read all of his adult books. (I say "adult" because he has a children's series which we have not read.)

We love his legal thrillers and have also enjoyed when he has occasionally departed from that ("The Painted House," "Ford County," "Skipping Christmas" and his only non-fiction work, "Innocent Man.") We agree he is a master storyteller.

Grisham is sometimes slammed by literary critics who say he turns out books so fast that he compromises on quality.

And he's not losing any sleep over that . . . as he's laughing all the way to the bank. And maybe I'm just shallow, but his stories grab me from page one. There might be some I like better than others, but I am yet to read one that has not been a page turner for me.

Another favorite author of mine is Ann Patchett. A longtime Nashville resident, she's the author of such works as "Bel Canto," "Run" and, her book of essays, "This is the Story of a Happy Marriage," among others.

Ann gave the city of Nashville a huge gift a few years ago when she, along with a partner, opened Parnassus Bookstore, which has quickly become one of the more popular independent bookstores in the South. If you ever visit Nashville, and you're a reader, you definitely want to pay a visit to Parnassus.

And finally, I've become a fan of Jon Meacham, an author and historian who also now makes his home in Nashville. He is a former editor at Newsweek and contributor to Time, and today you can often catch him as a commentator on MSNBC's "Morning Joe." He's a Pulitzer Prize winner and his most recent work is "Destiny and Power," about the Bush family, and more specifically George H.W. Bush, which I included in my top non-fiction list of 2016.

And the reason I am writing about these three authors today is last week I had the unique opportunity to see and hear all three of them. Parnassus Bookstore hosted John Grisham as part of his first book tour in 25 years for his most recent, "Camino Island." It was a ticketed event, and the the cost of the ticket included a copy of the book and the opportunity to meet Grisham and have him sign the book. He was extremely gracious and I thoroughly enjoyed the 90 seconds or so I got to spend with him.

After the signing, the three authors conducted a panel discussion that lasted about an hour and 15 minutes. It was delightful, and I am glad one of my good friends, a fellow reader, talked me into springing for a ticket. It was a most enjoyable evening.

Below, from left to right, are Meacham, Grisham and Patchett. I almost cut Meacham out of the picture but I was taking it from my seat, with my phone of course, and there was a pole right in front of me. (I am no photographer!) 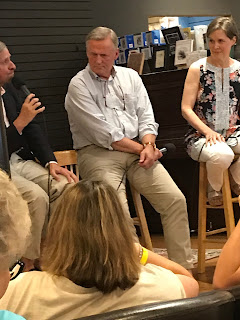 I am the first to admit I have my quirks.

I'm not full blown anal-retentive, but I am mildly so. I might have gone all the way had I married someone that way, but I did not. While my spouse can be highly organized when it comes to planning -- whether it's her next day's activities, a party or a trip -- she's pretty relaxed when it comes to order and organization around the house.

And that is not in a bad way at all. She just does not get worked up over everything having to be in its place all the time. Our house has always been neat, tidy and clean, but when our children were young and one of them had a room that was messy over a period of time, she didn't sweat it.

This made her a great mom. She can look back and know she took time to be a student of her children and emphasize their strengths, and she did an incredible job. The occasional unmade bed or messy room didn't scar them for life.

I, on the other hand, was always the more nervous type. If I passed by one of their rooms and the bed was unmade, I would usually just stop and make it. And I might have picked up some clothes off the floor while I was at it.

I know, I know, I wasn't doing them any favors by doing that but it made me feel better, even if the room was otherwise a disaster, to see the bed made. I probably missed some great times with my children, taking time to make their bed rather than helping them to do it, or just forgetting it and doing something more meaningful with them.

Even today, I can't stand an unmade bed. If for some reason we have to get up in a hurry and run out to do something, and don't return until near bedtime (a rare occurrence, but it will happen every so often), I will make the bed before I have to unmake it to go to sleep. It's just one of those things.

I tell you to this introduce the main topics which are somewhat, but not completely, related.

I don't know why this so annoys me, but it does. I just don't understand why you would not take the second longer it takes to spell something out. I'm trying to get better about not letting this bother me, but with limited success.

The other topic is related, I guess, because it also deals with technology. Maybe this has not arrived where you live. It was pretty common in Europe and Canada, I believe, before it got to the U.S.

It's little tablet computers that are used as cash registers. I am seeing them used increasingly in walk-up restaurants and even sometimes in ones where you order from the table. The restaurant employee will hand it to you and it will show the amount owed. If you are paying with a card, you have the opportunity to choose the amount of the tip.

This is all fine until it comes to the signature. You have to do with your finger and it's virtually impossible, for me at least, to write legibly. It's just a scribble, and that drives me crazy.

What's the big deal, you might be thinking, since most folks just scribble their signature anyway.

Well, not me. When I have to write my name, I write it in longhand and it is legible. I don't just write the initials and draw a line from there.

It's that mild anal-retentive thing again, and I just don't see it going away.

I'm sure people behind me in line are annoyed when I try to write my name legibly with my finger, because it sure takes longer, but they are going to have to deal with it.

So far, I have not required therapy for these quirks and my family members still seem to love me.

And as I said, I don't see this changing at this stage of the game.