Life is slowly returning to normal around here as mask mandates are lifted and people begin to be out and about more.

We are in a dinner club and we resumed meeting last night. We met one time last summer at an outside pavilion, and although it was enjoyable, it was nerve-wracking trying to stay an appropriate distance from folks, especially since a few didn't care about abiding by the guidelines anyway.

My employer is bringing most folks back onsite in September. I work for a regional financial institution with a presence in 15 states. We have about 19,000 employees and nearly all the non-customer facing ones have worked remotely for 14 months now. A lot of folks would prefer to continue remote working, but for most, it will be back to the office.

While my employer is not requiring employees get the vaccine, it is being strongly encouraged. I have three direct-reports, and I am supposed to encourage them to get it. I know I have at least one who is resisting it.

While I am 100 percent in favor of folks getting vaccinated, and I have gotten the vaccine myself, I have decided not to fret over those who don't. If they want to continue taking the risk, that is their decision. I tend to think it's a selfish one, but again, I'm not going there. (And I acknowledge those with medical or religious objections -- even though I don't know anyone who has either).

From what I'm reading, it seems I have a less than slim chance of getting COVID from an unvaccinated person, and if I do, it will be mild. So I'm not going to sweat it.

We have not gone back to church although we will soon. We watch it online and I've seen very few masks among the congregants, so until I got the vaccine, I had no intention of going.

This past year has been a lesson in humanity, hasn't it? Here where I live, a group of parents sued -- that's right, sued -- the school district for requiring masks. (Fortunately, a judge had the good sense to dismiss it). Last year at a local farmers market, a person wore a mask that had these words: "This mask is as worthless as our mayor."

I suppose that's because the mayor imposed a mask requirement. Our governor, rather than imposing statewide requirements, decided to leave it to local governments.

Those are just a couple of examples of some of the complaining I witnessed by folks who believed putting a piece of cloth over the nose and mouth violated their rights.

I just never thought it that much of an imposition to wear a mask. Did wearing them curb the incidents of new cases? I can't prove it, but I think it did. And in my opinion, by wearing one, you were saying you cared enough about the people with whom you came in contact to take every reasonable precaution.

In my view, it's that love-your-neighbor thing.

I still see folks wearing them here and there, and I'm still wearing one in the grocery or hardware store when I go.

From what I read, we have not reached herd immunity, nor will we anytime soon. But case numbers are going in the right direction and I don't think we're going back to the restrictions we learned to live with.

It's a new day -- I have a new laptop computer!

I've had a couple of Dells over the years and, to put it nicely, I hated them. They were bulky and got viruses within a year after I had them and the support folks were no help. I have not had a computer to call my own for several years.

My children said I should get a Mac, but here's the thing: my needs are simple. I want word processing, the internet and a place to store a few pictures. And I want to join the occasional video call.

So I could not justify spending the money for a Mac, even though I'm sure they are fine machines.

I've been using my work computer to type my column, sending it to my personal email, then forwarding to my editor. That's not optimal.

For other things, like posting a blog, I use Wife's desktop. She inherited it from her job from which she retired two years ago, and it has its quirks. But since it's hers, I really can't complain. I've had all kinds of problems with Blogger and I suspect it was in large part (a) user error and (b) not really knowing the ins and outs of the desktop computer I was using.

So as I contemplated buying my very own laptop, here's what I knew: I had not been happy with Dell. I don't want to use Wife's desktop anymore. And I don't need anything fancy.

For work, I have an HP that works beautifully. For that one I also have at my fingertips tech support for a company that employs 19,000 people, so that’s probably a big factor in why it seems to work so well for me. But still,I know my way around it.

So that is what I got for my personal use and it's what I'm using to make this post. It was not expensive and it's early yet, but I'm optimistic.

Some newer visitors here might not be aware that, years ago, I became the custodian of a pickup truck.

Well, you probably don't even care, but I thought it was a good subject to write about today.

I say "custodian" because, even though according to the State of Tennessee I would be the legal owner, I keep the truck in my possession pursuant to an agreement with my older son, who lives in Atlanta.

When Older Son was living in Dallas, he still had the pickup truck we had bought for him when he was in college. It's a green 2000 Chevy Silverado, affectionately called the "Green Machine."

He loved that truck, but it was not practical for the amount of driving he had to do with his job in Dallas, scouting out commercial real estate sites.

So in late 2014 when he decided to get a more fuel-efficient vehicle, he did not want to part with the Green Machine. He proposed that he entrust it to me for an indefinite period of time.

I was happy to oblige. You can do the math and figure I've had that truck for a few years now. When he moved to Atlanta the year after he entrusted it to me, I thought he might want it back, but he said he would like for it to stay with me for the time being.

And I don't know what I would do without it. I use that truck all the time. And I learned quickly that friends like to have friends who have trucks. The Green Machine has been loaned out numerous times to folks who are moving or need to move large items.

I always have to give a tutorial to those who drive it. It's quirky. You don't want to try to lock it because the driver's side lock was picked one time, so putting the key in the lock is not reliable and the keyless lock doesn't always work.

The brake light occasionally comes on but my mechanic has assured me there is nothing wrong with the brakes. Every once in a while the "Low Coolant" light will come on, but I've checked it and the coolant level is fine.

So you can pretty much ignore the warning lights, I tell the temporary drivers, unless it's not one of those two. Then you might need to call me.

I don't like to use bad language, but in this case I think it's justified:  the damn squirrels in my yard got up in the engine and chewed through some hoses, doing several hundred dollars' worth of damage. (There is not a space in my garage for the Green Machine).

After repairs were made, the aforementioned mechanic suggested hanging a couple of plastic bags of moth balls underneath to repel squirrels. It's been several years and that seems to have done the trick.

A borrower of the truck once called to tell me about the bags. I told him to leave them alone.

The Green Machine has 202,000 miles on it and is doing well. It passes the annual emissions test required by the state.

I don't know that my son will ever want it back, especially since he now has a late model Silverado, so why would he need it? He has said his son, who is three, might like to have it someday, but we have a few years to deal with that and I don't know if it would last that long. I think Older Son's current truck will be good for my grandson.

For now, the one I have is awfully handy and serves me well. And of course there is great sentimental value.

Its most recent use was hauling mulch home from the hardware store. For a berm in my front yard, I could park it in the street just a few feet away for ease of unloading. Below shows the truck bed a few minutes after I finished. Job well done, Green Machine. 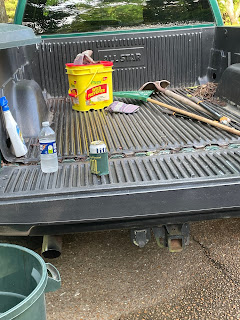