The weather here is typical of summer in this type of the country -- hot and humid. During the 10 p.m. newscast last night I heard the local weather lady say the air is so thick "you can move it around."

The Labor Day weekend forecast is for highs in the mid to high 90s with a chance of scattered thunderstorms. Again, that's typical.

I detest hot weather and usually by this time of year I'm just holding on to the fact that fall, along with relief, is in sight.

But let me tell you something: we can hardly complain this year. It has been the mildest summer I can remember in my 16 years of living here. Except for a couple of glorious summers in Colorado, every summer prior to that was spent in Arkansas and it was always muggy there in the summers. So I am well acquainted with this type of weather.

But it was downright pleasant here for almost all of June and we had spots of it all through July and August -- days where temperatures would top out in the mid 80s or even lower, and some nights where they would dip down near 60.

But a couple of days ago the steamer came on, as if summer is telling us, "Not so fast. I'm not going anywhere yet."

Strangely,also as of a couple of days ago, the hummingbirds seem to have left us. If you read my last post, you saw a picture of one our frequent visitors outside the kitchen window. They have been sucking that feeder dry and Wife has been filling it up about once a week.

This morning she took it down, gave it a good washing and filled it with fresh "juice" to see if maybe they'll come back.

I'm wondering if perhaps they also enjoyed the cooler summer we have experienced and decided to pack up and move on when this heat wave hit.

Last summer we hung a hummingbird feeder outside our kitchen's big picture window. The feeder was filled with a red concoction made from a base we purchased and mixed according to instructions. I remember hanging it and having "customers" within 30 minutes.

The hummingbirds are fascinating to watch. There are three spigots on the feeder but the birds don't seem to do group activities well. If one is feeding and another one flies up, the one that was already there appears to chase the other one away, even though there is plenty of room for both of them. I say "appears" because (a) I don't really know what's going on in the world of hummingbirds and (b) they move so fast that it's hard to tell who would be chasing whom.

Anyway, I was anxious to put out the feeder again this summer. I did so about six weeks ago, mixing from the same base we had stored in the refrigerator from last year. I followed the instructions exactly.

But no hummingbirds came. Not a one. I asked Kelly, my bird expert, about it and she suggested that maybe the mix was "stale" and I should start over again. I did, using the same mix again, with still no results.

I think what Kelly meant was that I needed a new mix altogether. Wife agreed. She found a recipe and mixed up her own hummingbird nectar. Interestingly, it has no color. The mix we used last year was bright red and I thought that was what attracted the hummingbirds.

Wife read that as long as there is some hint of red on the feeder, it is not necessary to color the water. In fact, the instructions for the recipe she used recommended against it, saying the food coloring might make the nectar bitter.

Each of the little spigots is red but they are so small that I was doubtful that would be enough to attract the little boogers.

Not to worry. I am happy to report this did the trick. They are back in force and they're not any nicer to each other than they were last year. It's still one at a time. They are a still a big kick to watch. 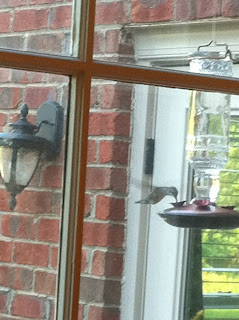 U.S. Highway 167 runs north and south and it is of particular significance to me for two reasons:  (a) it is the main road that connects Little Rock, Arkansas, the city where I went to law school, got married and lived as an adult until 1997, and El Dorado (pronounced el-do-ray-do), the town where I grew up in south Arkansas; and (b) it goes south from El Dorado to Ruston, Louisiana, where I went to college at Louisiana Tech University from 1976 to 1980.

For decades both of these stretches of 167 were almost entirely two-lane, winding through towns in Arkansas called Sheridan, Fordyce and Hampton. In Louisiana the towns between El Dorado and Ruston are Junction City (on the state line), Bernice, Dubach and Vienna.  All are splendid little towns that have changed some with the times but in many respects remain the same as they were during the years I traveled these stretches of road so much, containing little service stations (now convenience stores) and fast food drive-ins with names like "Daisy Queen."

Today both stretches contain significant parts that are four-lane and although they have made travel more efficient, I maintain that the road has lost a bit of its character with less yellow lines, double yellow lines and narrow bridges.

I got to travel 167 last weekend as I returned to both my college town and my old hometown. Familiar faces greeted me at both places -- old college and high school friends who remain dear to me. Also had a good visit with my brother in Camden, Arkansas, just north of El Dorado, on Sunday.

Here's a picture of my El Dorado group at dinner Saturday night. That's me on the far right on the second row and blog friend Kelly on the left on the front row. I think we all look pretty good for middle-agers, if I do say so myself! 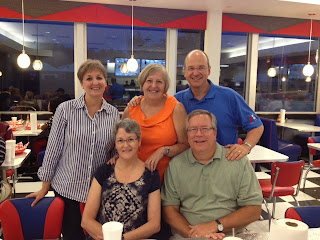