After eight-plus months of anticipating and planning, the blessed event has come and gone. This past Saturday night Older Son got married to my new daughter-in-law (no longer FDIL). It was, in a word, glorious.

Although they are now on their honeymoon in Mexico, memories of the special weekend linger.

Wife and I were thrilled with the Rehearsal Dinner. The venue (Nashville's Union Station Hotel) was lovely, the food delicious and the ambience just right. We had about 75 guests. Highlights included toasts to the bride and groom and a special slide show video that Daughter had made.

The wedding itself was a holy, joyous event in a church sanctuary that was absolutely breathtaking. The reception was celebratory and loads of fun. Older Son and his bride were beaming. There was dancing...and more dancing. We sent them off under masses of blue-and-orange Auburn shakers about 11:15 p.m.

We had a brunch at our house Sunday morning for our out of town guests, catered by dear friends.

Wife and I had hearts full to overflowing all weekend. We consider ourselves so incredibly blessed. I really am without words to adequately describe it so I will show you pictures instead.

Here are a few highlights: 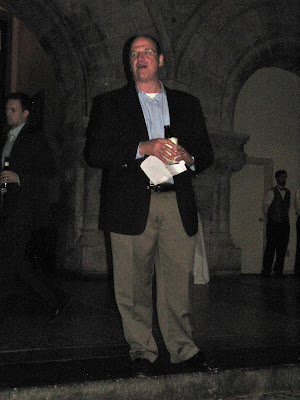 Yours truly speaking at the rehearsal dinner 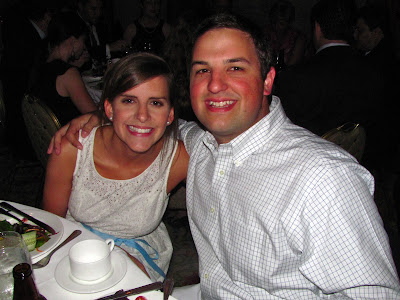 Bride and Groom at rehearsal dinner 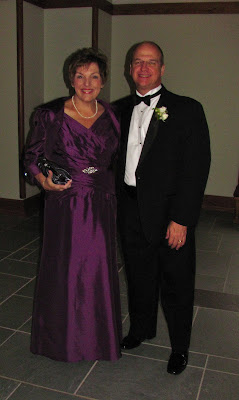 Me with my beautiful wife. Did I marry up or what? 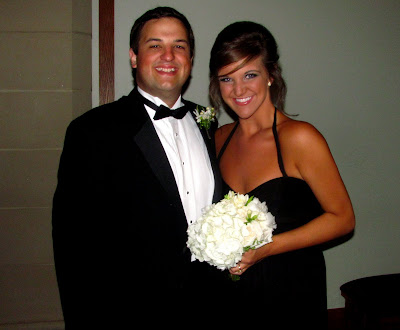 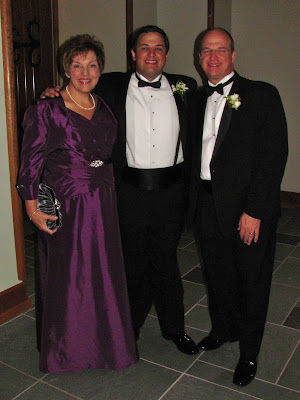 Parents of the groom with the groom 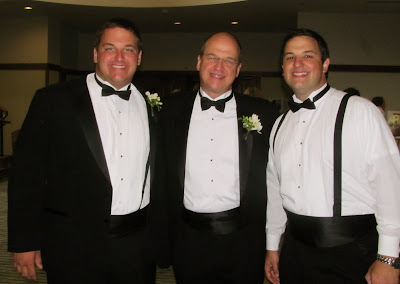 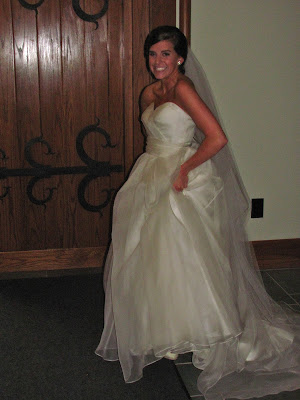 About to see her groom for the first time! 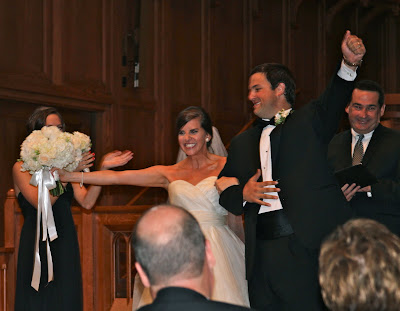 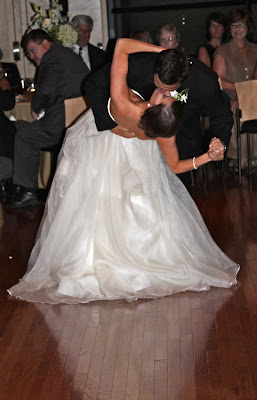 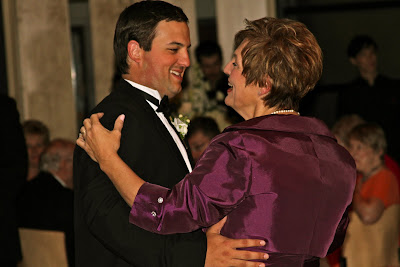 Mom and Son (those dance lessons paid off!) 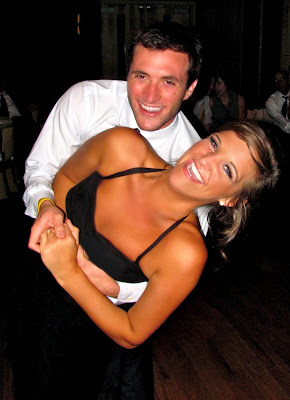 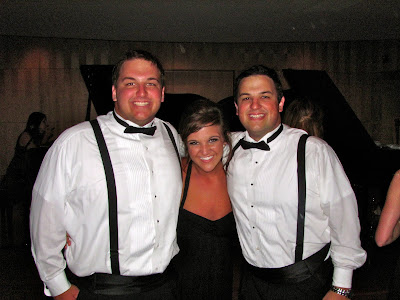 Could I be more proud of these three? 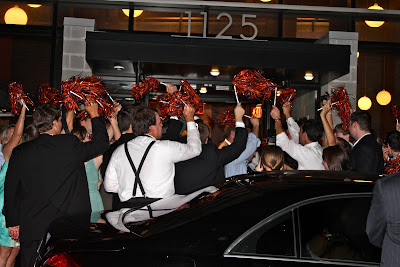 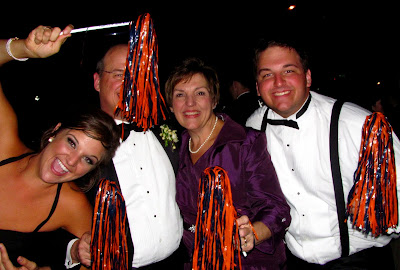 The party is over!

Well we are down to a little less than 72 hours until the wedding. Can't believe eight months have passed and the day is almost here.

The festivities begin tomorrow night. Older Son and FDIL have bought a block of tickets to the Nashville Sounds (our minor league baseball team) game for those who are in town. I was an early "yes" on this since Older Son is sponsoring the event! Should be a hoot.

He'll be playing golf with his groomsmen on Friday. I am not a golfer so I'll sit that one out. For the ladies Friday, there will be the bridesmaids' luncheon.

Wife and I are hosting the Rehearsal Dinner Friday night at Nashville's Union Station Hotel. Wife has worked very hard to make it a very special event and I am sure it will be.

I have invited Older Son's groomsmen to an early lunch on Saturday. Then the big event takes place at 6 p.m.

Sunday morning Wife and I are having a brunch at our house so we can, hopefully, visit a bit with friends and family who we will quite likely feel we have not given adequate attention. A good friend of Wife's is catering the event and, as Wife says, all we will have to do is unlock the door.

Wife and I had our fifth dance lesson this afternoon and we feel adequately prepared to not embarrass ourselves. The lessons have really been fun but the dance studio folks are wearing us out. Every lesson is about half dancing and half sales pitch for future lessons. They mean well and I realize it's a business, but I didn't sign up for this to enlarge my social circles; Wife and I just wanted to learn a little "movement" if you will.

I feel bad about it but we scheduled another lesson for next week, which we fully intend to cancel. We have no intention of returning. But there was just no way to get out of there (without making a scene, which Wife and I both always try to avoid) unless we signed on for another lesson.

There has been a fair amount of stress this week with all of the details that had to be attended to, but things have gone smoothly and Wife and I have balanced each other out. When she's been stressed, I've been calm, and vice-versa. This is a joyous time and we are thankful.

I should be posting a full report and, hopefully, photos in a few days.
Posted by Bob at 8:13 PM 4 comments:

Passing on a table, and memories

There's an old, round wooden table with a light maple finish that's been in our backyard playhouse (read: storage facility) for several years now.

It is one of the only pieces of new, wood furniture I remember my parents ever purchasing and their purchasing it is one of my earliest memories. I'm guessing it was 1962, making the table just shy of 50 years old.

My mother loved old things and, rather than buying new furniture, she would pick up tables, chairs, lamps, etc. -- you name it -- at estate sales and antique shops. She would strip, sand and refinish pieces herself. I have a lot of those today.

I suspect her love of all things old was as much about her being frugal as it was her affinity for antiques, but she was inceredibly zealous about it.

To be honest, as I was growing up, I got tired of some of these pieces. The chairs were rickety and squeaky, and sometimes fell apart. I got tired of telling my friends -- and got tired of my parents telling my friends -- not to lean back in a chair, as guys inherently do, lest it would break. I have even had a recent reminder of that as I had to take a couple of their old dining room chairs, which are now in my dining room, to be repaired a few months ago.

Today, of course, with the benefit of age, I appreciate that furniture because of its history. I look at one of those old tables or chairs and I see past the flaws. I see my mother, stripping off the old stain, sanding it down and making it into something . . . . well, not new by any means, but fit to be used in a family's home.

Back to the round table. Around 1962, as I said, my parents bought this table. It's perfectly round, about three or four feet in diameter and it seats four, or five in a pinch.

This was our kitchen table in four different houses as I was growing up, its longest stint being in the house my folks built in late 1966 and where my dad was still living when he died five years ago. Countless meals were eaten at that table by my parents, my brother and me, and many family meetings took place there. Games were played. Pinewood Derby cars were constructed. Gallons of coffee were consumed by my mother and her neighbor friends at this table.

Over the years there were nicks and scratches and of course countless spills. It was the centerpiece of a not-very-large kitchen, so it absorbed grime from cooking. My mom always meant to put a new finish on it.

When I went to law school in 1980, my parents had become emtpy nesters. They disassembled the top, round piece of the table from its single pedestal and gave it to me, and put a smaller one in their kitchen. My dad and I packed the round table into a U-Haul and moved it into my new apartment. We placed it in front of a picture window. My mother found some used (of course) chairs to place around it.

The table went with us to two more houses in Little Rock and to the three we have lived in here. High chairs were pushed up to it. Homework was done there and games were played. A few years ago we once again disassembled it and decided to store it.

Yesterday I took the top piece of the table from the playhouse. I set it up on a makeshift work bench I had set up in the garage. I washed it down and stripped off the old, nearly-50-year-old stain. I stripped away scratches and water marks from its years of use, which came off quite stubbornly.

I will now sand it down and apply a new finish. It will not, by any means, look new, but it will be a solid table, ready for many more years of use. Maybe I will find some old, rickety chairs to place around it.

I will present it to Older Son and his bride, and they will be the third generation to use it. They will sit there and eat their meals as newlyweds and, who knows, at some point they might be pushing a high chair up next to it, playing games on it and/or helping with homework on it. It will be disassembled from its pedestal when they move. It will withstand more nicks, scratches and spills. I think it will serve them well.

They might decide to eventually store it for a time, and they might eventually pass it on to another generation. I know it's just a table and a table is a thing but I hope that, eventually, they will appreciate its heritage and look past its flaws to someone who stripped and stained it, then refinished it just for them, with a big dose of love and good wishes.
Posted by Bob at 1:34 PM 7 comments: