Although we live in the suburbs, we live among all kinds of wildlife.

It’s a peaceful coexistence for the most part, and I have a fondness for most of the animals, except for squirrels (because they destroy my bird feeders; have gotten up in the engine of my truck and caused hundreds of dollars’ worth of damage; and got in our attic once); and the occasional snake (hate them all). And of course I’m not crazy about skunks for obvious reasons.

Last Friday we had an interesting incident with a deer. It was early afternoon and Wife had been out for a while. When she came in, I was working, and she beckoned me to come look out the window. There in the front yard, in a little crevice where the water meter is located, was a tiny fawn, obviously recently born, curled up in a little ball. I could hardly see him (or her, but I’ll use the masculine pronoun for consistency), but his little ears were barely sticking up above the grass.

We had witnessed something similar about 20 years ago when we lived in another house and a fawn much like this one was snuggled tightly up against a tree, in a little indentation at the roots.

When that happened, Wife called our local Animal Control office because we were concerned the fawn had been abandoned by its mother. The person to whom Wife spoke, however, told Wife that in almost all cases such as this, the mother placed the fawn there and will return for him later, usually within a day or so. We were instructed to not interfere.

Sure enough, within 24 hours the fawn was gone. The mother had obviously returned and herded her little one to a safer place.

With this situation a few days ago, we recalled the similar incident from long ago. We couldn’t stay away from the window, however, and later that afternoon we watched and held our breath as a band of turkeys practically did a dance around the little guy, but never directly approached him. He was obviously scared and a couple of times got up and wobbled a bit, only to hunker back down in his makeshift bed.

That night we had terrible storms here with heavy rains and high winds. We were out to eat and waited out the weather a bit in the restaurant. We wondered about our new yard tenant. When we pulled into our driveway about 9 p.m., we could see his ears still just above the grass.

Saturday morning I started on a walk at 6:30 and he was gone. Mom had returned.

I’m fascinated by nature and how animals function, even right here among we humans. (But I still detest squirrels and snakes). 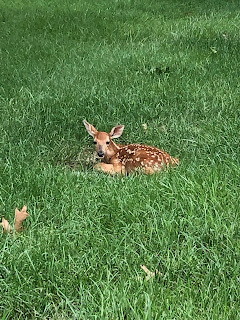 On the road again

Those of you who have adult children have likely, sometime in your past, helped said child or children move.

These moves often involve loading up a truck, a van or a car, or some combination thereof.

I’m just coming off one of those moves, this time with Younger Son.

He graduated from college four years ago. He stayed in Auburn, his college town, and worked that first year out and pretty much still did college-type housing. In August 2016 he took a job in South Bend, Indiana, writing for a publication that covers sports for the University of Notre Dame. A few weeks before he started, Wife went up there with him and helped him find a place to live.

As I recall, he had a fishing trip to Wyoming planned a few days before he started his job. So in true “What’s wrong with this picture?” fashion, Wife and I drove his pickup truck and another borrowed one to his new home and unloaded his belongings. Somewhere during those few days he flew into Chicago from his fishing trip and we picked him up there, then deposited him into his new place to start his new life.

That move wasn’t terrible. We took his clothes and a few furniture odds and ends from here, but he bought the bigger  items like a bed, sofa and desk after he got there.

Fast forward to just recently. Younger Son accepted a job with a marketing and public relations firm in Birmingham, AL about 2.5 hours south of here. We are thrilled he will be closer to us, and the job appears to be a good one for him. But of course this means another move.

I told him we were available to help, with some conditions, and he took us up on the offer. This time I was not interested in our going to move him while he went fishing. So my conditions were his being involved in all aspects of the move and getting the packing done before we arrived to help him load.

This past Friday morning Wife left to drive to South Bend in her car and I followed several hours later in a rented truck. I had reserved a cargo van, but the rental company called me on Wednesday and said they had overbooked, but they would let me have a truck for the same price. I told them this was not my preference as I didn’t relish driving all that way (about 1,000 miles round trip) in a big truck, and they said they would try their best to have a cargo van.

I don’t know how hard they tried, but a truck it was. When the guy helping me drove that mammoth vehicle from behind the rental agency building, I almost told him to forget it. I drove a 15-passenger van up and and down a mountain when I worked in Colorado many years ago, and I drove a small rented truck to my dad’s house in south Arkansas one time to get some furniture. But I had never driven anything this big.

I must say, however, that other than it not being very comfortable, driving it was not difficult. You have to depend on side mirrors to watch what’s behind you and you have to be constantly mindful of how much space you’re taking up on the road. But once I got used to it, I did OK.

Younger Son had done his part and was completely packed. He and I got everything loaded and we left him with an air mattress, a couple of sofa cushions and a TV. He’ll take care of a few last-minute things there and leave in a couple of days.

I drove the truck back here yesterday and I hired some young guys to unload it for me into our garage this morning (which I do not apologize for). Younger Son starts his job June 24 and still has to find a place to live, and may be doing something temporary at first, so he’s storing his stuff here in the interim.

The move from here to Birmingham will be on him and although I’m willing to help some, I expect him to show up here with a truck or instruct the movers he hires to do so.

He had a good run up in Indiana and he knew when he went there that it would not be a career-type job. Three years was a good stint and he got some valuable experience. He got to do some cool stuff and saw different parts of the country. Other than moving him in and out, we only visited once, going to a Notre Dame football game which was a lot of fun.

Now a new chapter begins. I’m advising him not to plan a fishing trip around move-in time.

A picture of the vehicle I drive is shown here. I must say I’m a bit proud of myself. 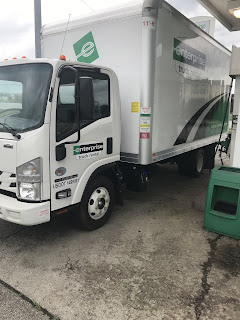