As I write this, in less then 24 hours, the "Great American Eclipse" will be history.

Although I am excited about it, especially since I live right on the edge of the "path of totality," I am also stressed out.

Don't judge me. There is a lot of pressure around here to make sure I'm in that path. I am told that if I miss it, I will regret it the rest of my life. But I can't look directly at the sun except for that very brief period of time where the moon is completely between the sun and me.

Had I planned better, I would have scheduled the day off tomorrow and headed north a few miles of Nashville where totality will be about two and a half minutes. But Wife and I are leaving on a ten-day vacation to Ireland next Thursday and a day away is not in the cards. We will, however, work from home, and take a break during the eclipse.

A few nights ago we downloaded an app on her phone that detects our location (of course it does) and tells us not only if we are in the path of totality, but how long it will last.

We are outside the path here at the house. A mile or so north of here, we can get to about 30 seconds, and in a few more miles we can get to over a minute.

So our plan tomorrow is to get in the car about 11 a.m. and head north a bit. We found some church parking lots with some "sweet spots" the other night when we went and tested the app, and we figure they will be OK to have us hang out (and I doubt we will be alone).

Downtown Nashville and north of downtown are likely to be crazy, and traffic is predicted to be nuts, so I want to stay as close to home as possible. As I said, I don't have time to devote the entire day to it.

We are equipped with our NASA-approved glasses for the partial, and will carefully remove them for that oh-so-brief time of the total. It's going to be surreal. The hype and excitement around this area are comparable to our big sporting events and the Country Music festivals.

I took a selfie of myself wearing the glasses but I'm doing all of you a favor and not posting it. I'm simply posting a pair of the glasses.

Happy Great Solar Eclipse to all. 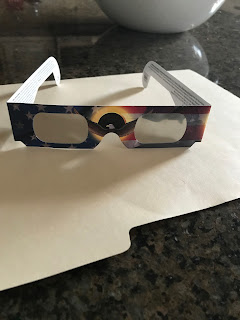 How in the world did it get to be August? My grandson came into the world on July 3rd and now he's five weeks old.

And, oh my, how smitten am I with this new addition to the family?! I will try not to be THAT kind of grandfather, but rest assured, I'm more than thrilled with my new role as GrandBob. (And how blessed am I? I get to become GrandBob times two in October!)

Wife has spent a fair amount of time with the new family of three over the past month. She stayed a week after he was born, then went back for about three days again, and will go for a day next week while Daughter goes for her follow-up Doctor's visit. And this weekend, the new grandson will make his visit to see his grandparents on their turf. Can't wait for that.

In other happenings, we are all atwitter here in Middle Tennessee about the upcoming solar eclipse on August 21st. Nashville is the largest city in the "path of totality" (where there will be a total eclipse, as opposed to a partial one) and there will be droves of people coming here.

Wife and I are in a little bit of a dilemma about what to do. We live in a suburb a few miles south of Nashville, and we won't have the totality, or length of totality, that they will have north of here. I could choose to work in downtown Nashville that day, but with all the crowds and craziness, I'm not sure I want to do that. We are leaving three days later for our vacation to Ireland (more on that later), so neither of us is in a position to take the day off. I think it will be pretty remarkable even where we are, but on the other hand, I don't want to cheat myself by trying to avoid the crowds.

I just returned from another baseball trip with my two sons, this time in Minneapolis. We all met there Friday morning and had a great time, as usual. This marked the 26th major league park for Older Son, with only four to go. I'm at number 24, and Younger Son is at 20.

We went to games Friday and Saturday nights. Younger Son had researched good places to eat and some breweries in the downtown area where we stayed, and Saturday morning we went to a park with some beautiful hiking trails and waterfalls.

The goal of visiting each major league park started when Older Son was 8 and he and I went to Atlanta (where he now lives) to see the Braves. He had become a fan watching them on one of the Turner cable channels.

He will hit number 30 in a few years, I suppose, but as Younger Son so eloquently put it a few years ago, it's not a race. And I don't know of a journey I have enjoyed as much.

It was a beautiful weekend in Minneapolis, and here's the view from our seats at Friday night's game: 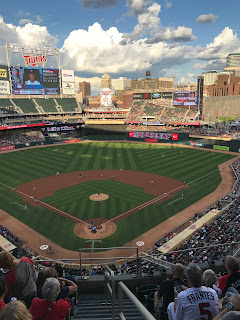