If you read my last post, you might remember that I talked about the prediction of snow last week and the mad rush at the grocery store.

That little snow event amounted to very little. There was a dusting, and enough early morning freezing to cause the cancellation of school for the day.

That was on Wednesday. The temperatures rose above freezing later in the day and the minor accumulation quickly melted off.

As I stated at the end of my last installment, more was scheduled for Friday.

Ho-hum. It didn't amount to much Wednesday so I didn't give much thought to Friday. I got up and went to a 5 a.m. spin class and planned to head downtown for a meeting about 8.

When my class was over at 6, the snow was beginning. I went back home and stayed there, as did most folks. By sundown we had about 5 inches at our house and in parts of Nashville, there was as much as 9 or 10 inches.

But I will tell you this: it is a very sad thing to have snow and no children at home. Wife and I went out for a walk and we were giddy enough about it all, and she was kind enough to let me throw a couple of snowballs at her.

But still . . . it wasn't quite the same. Saturday morning I stood at one of our front windows and watched as a couple of neighborhood dads pushed their little ones on sleds.

Here's a picture of the back deck as it came down Friday. It's about all melted now, but this was a grand snow. 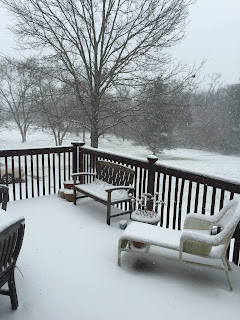 We are not accustomed to snow around here, not big amounts anyway. Every few years we might get some serious accumulation but a typical winter might find us getting a dusting or two. Even so, it's a HUGE deal when there is even the remotest possibility of the white stuff.

Scarcely a month ago, as we wore shorts and ran the air conditioning ON CHRISTMAS DAY (!), we wondered if we would have winter this year.

In January it has arrived, and there is snow in the forecast. So people, as usual, are going crazy.

I had a work-at-home day today and made a mid-day run to the grocery store at the request of Wife.

I wondered why the parking lot was so full and then it dawned on me, of course. The weather folks are predicting snow. And so many people around here seem to believe that also means they will STARVE, which means they go to the grocery store EN MASSE. And as I have previously stated, they buy bread and milk even if they don't eat bread or drink milk.

It's not really that they believe they will starve if it snows -- it's this mentality that we'll get snowed in for days and they'll go through everything in their pantry and won't be able to make it to the grocery store.

Never mind that, even though snow is in the forecast for tomorrow, it is supposed to get above freezing by noon, so driving should not be a problem.

And never mind that the city officials are really good about getting salt on the roads and getting the snow plows out so that, even if there is accumulation, it's very rare that we cannot get out and get to the places we need to go, including the grocery store.

No, as soon as we hear there's a forecast for winter weather, we're not taking any chances and we're stocking up on provisions. That's just the way it is.

I'm supposed to drive to Birmingham for work tomorrow and I don't anticipate that being a problem. I'm leaving early and driving south, and it's supposed to be a bit warmer down there.

We have plenty of food on hand and Wife should not go hungry for the couple of days I am gone, even in the unlikely event she finds herself stranded.

More snow is predicted for Friday so, should we get any accumulation tomorrow, the cautious among us should be able to get out Thursday and stock up again (that wont' be me). Can't take any chances for the weekend, you know.