Adding to the family

A week ago Thursday morning (about 10 days ago as I write this) my phone rang about 7 a.m. and the caller ID displayed DSO's name. (As a reminder, DSO stands for "Daughter's Significant Other," which has been his role in our lives for just short of three years).

When I answered, he greeted me and wanted to make sure he had not awakened me (he had not), then asked if I had any plans for the evening. I told him that, to my knowledge, I did not, at which time he asked if I would like to meet him for dinner or a drink. I told him dinner would be fine and we made plans for a time and place.

I'm not the brightest bulb in the chandelier, but DSO and I don't chat a lot on the phone and certainly not at 7 a.m.  Neither do we make dinner plans for just the two of us. I had a pretty good idea of what he might want to talk about.

I met him that night at the appointed place and time and he was already there, about one beer down by the time I got there. We made small talk for a good 20 minutes and he discussed the menu in great detail. Just before I was about to say, "What's on your mind?," he quite nervously let me know.

He proceeded to tell me how much he loves Daughter and asked if I would give him my blessing to propose to her.

All day I had thought of how I might respond to this, and I will tell you that I have never felt as unprepared for anything in my life. Would I grill him about his intentions and his plans for the future?  Would I lecture him about the ups and downs of marriage and give him the no-rose-garden speech?

When it came my turn to talk, I went with my gut.

I thanked him for calling me and arranging our meeting. I told him he is an adult and Daughter is an adult and he needed neither her mother's nor my permission to marry her.

But I told him the fact that he would want to talk to me in advance of proposing to my one and only daughter, who is the absolute light of my life, meant a great deal to me and that most certainly he had the blessing of Wife and me.

There were many other things said but they will mostly stay between DSO and me. I will tell you, however, that it was one of the sweetest conversations I have ever had and one I'll always remember and cherish. Most importantly, the things said to me during that dinner reflect the character of the man who will be my son-in-law, the man Wife and I have prayed for since Daughter was a little girl.

Yesterday morning, the day after Thanksgiving, DSO took Daughter on a walk at one of their favorite spots in Nashville, Radnor Lake, and popped the question. A couple of hours later they returned to our house where our family, as well as DSO's parents and grandparents, and Daughter's best friend from college, were waiting to help celebrate.

We toasted them, prayed for them and had a lovely lunch together. It was one of those days where Wife's and my hearts were full.

The plans are just beginning. Mostly Daughter is still grinning and enjoying the well wishes of others.

Daughter is the sweetest girl on this planet and I say that, of course, with all sincerity and objectivity. I am putty in her hands and I make no apologies for it.

And if I can't keep her right here with me forever, well, I think DSO is well qualified to be the man of her dreams. From henceforth, until the time they become husband and wife, he shall be known in this space as FSIL -- Future-Son-In-Law. 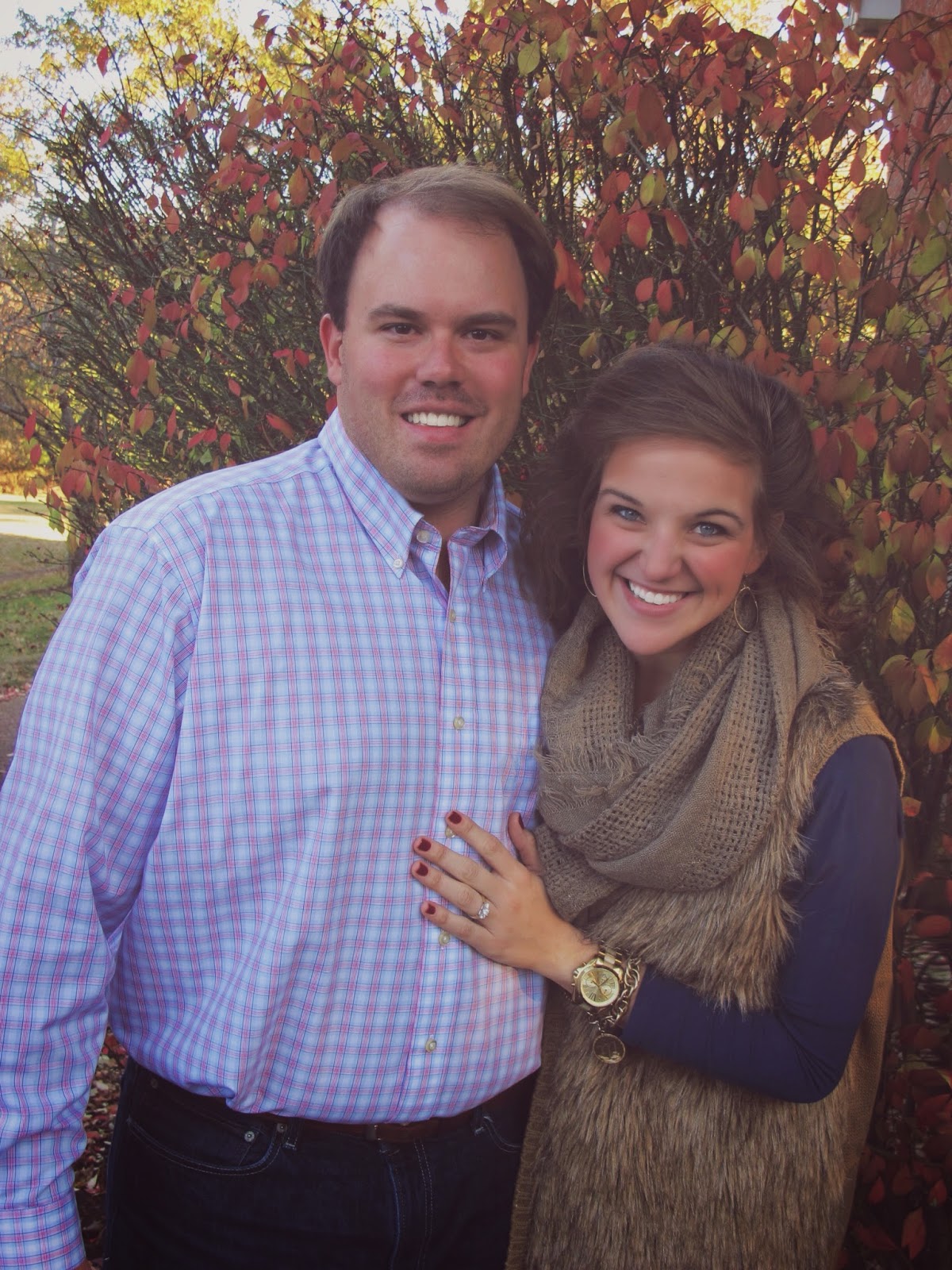 It is Thanksgiving Eve (day) and Wife has just headed out for yet another grocery store run. She did her "major" shopping days ago but there's always that last-minute stuff (her words).

We'll have nine tomorrow -- all our crew plus DIL's parents. It will be a great day and we'll have a great meal and we will have much for which to be thankful.

Thanksgiving has for years been my favorite holiday, especially in my adult life. Wife and I hosted our first Thanksgiving dinner as a married couple in 1984, with my parents and her grandmother as our guests.

We were up intermittently through the night, alternately immersing the bird in hot water and defrosting it with a hairdryer. We didn't know that the cavity was stuffed with the giblets and after they fell out, I stuck a flashlight up there to make sure there wasn't anything else lurking about.

The turkey ended up being delicious and, as far as I know, nobody contracted food poisoning from that meal.

Through the years we hosted many Thanksgiving meals, combining our families and navigating through political discussions. Some 30 years later we know how to steer conversations in different directions when it needs doing.

There are always mishaps and near-disasters, but we always have a great day. Not perfect but always memorable.