Forever in our hearts 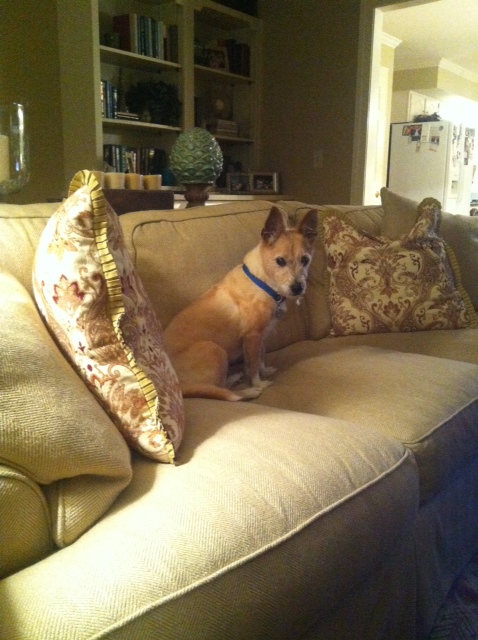 This will be the last in my three-part series on Ralph the Dog. I did not, of course, set out to write a trilogy; it just ended up that way.

In my last couple of installments I told you how I was supposed to "know" when it would be time to help Ralph along. I wondered if I ever would really know. A number of you told me I would, in fact, know, and if I was struggling with that, then it was not yet time.

You were right. And at 5:30 yesterday morning I knew.

For the past several weeks, I knew the time was getting close. But Ralph still enjoyed some of the things he had always enjoyed like our morning walks (he would still meet me at the door, tail wagging, trying to get out the door before I could open it, as if he would finally be able to just walk through it), and he still stood on his hind legs when one of us would hold up his bag of treats or stand in front of him with any food item he liked (and there were many).

He had to be boarded for a little over a week recently due to a leak in our kitchen which forced us to have our floors stripped and refinished, causing us to have to leave the house.

Susan picked him up this past Thursday morning and our good friend at his kennel said he had done fine as usual, eating heartily and enjoying the pampering he always received there.  Susan said he acted excited to see her and skipped right out to her with his usual look of, "Let's get out of here."

He acted equally excited to see me Thursday night. Maggie heard me drive up and met me down in the garage with him. He ran out to me and we walked around the yard a bit.

About mid-day, however, Susan and I both noticed a greater-than-usual lethargy on his part. He would eat his treats but couldn't make it onto his hind legs.He stopped eating dog food but still drank water. He would very reluctantly jump off his usual perch on the playroom sofa to go outside and it only happened after much coaxing. Every trip outside took a lot of coaxing, for that matter.

He walked gingerly and his back was humped a bit. He had a sad look in his eyes. He would, however, still wag his tail when I said his name.

Saturday morning I had to carry him to the front door. He did not wag his tail when he saw me with the leash. Rather, he seemed to walk outside as an act of obedience rather than desire. We walked slowly and I eventually picked him up and carried him back in.

The rest of the day Saturday was much the same.  He lay prostrate on the floor, or on the aforementioned sofa, and by the end of the day he would no longer jump up there -- we had to lift him.

Saturday night we noticed his breathing was becoming labored. I carried him upstairs and put him on a blanket on the floor in Maggie's room which had become one of his sleeping places. Where previously he would have made a little circle, curled into a tight little ball and settled in for the night, he just stood there for a  long while, humped as previously described, before finally lying down front-ways on his "haunches."

About 12:30 I woke up and saw the light on in Maggie's room. She was looking over at him from her bed as he was again breathing erratically. I picked him up and took him downstairs.

I put him on his usual spot on the sofa. I lay down on the other end and dozed off and on. At 5:30 I reached over to pet him. He winced and looked up at me, then wagged his tail just a bit, and I knew it was time. It was as if he were telling me, "I've done all I can do. It's been a good ride but now you know. It's time."

I went and woke Susan. She recommended calling the after-hours vet. I did, and the nice lady who answered the phone said they would be waiting for us. Susan woke Maggie and 15 minutes later we were there.

A very kind young female veterinarian talked with us and we confirmed it was time. We said our tearful goodbyes. We felt a great sense of comfort and peace as we felt Ralph relax after having struggled so much over the past couple of days.

We were devastated, of course, but never once doubted.

Four weeks ago it was not time. It wasn't time three weeks, two weeks or one week ago. Yesterday it was time. We were tearful and it was agonizing. But it was time.

The above picture was taken by Maggie one night when Ralph jumped up on the sofa in the den, one that is strictly off limits to him by order of his mother, which he knew.

But his mother had left town for a few days. It was not unlike him to occasionally "push the envelope."  Just observe the look in his eye. He knew exactly what he was doing.

We have discussed whether we will see Ralph again and questioned his having a soul.

Of either I have no doubt. We will see him again and that soul is forever linked with a family of which he was a faithful member until the very end.

Well, Ralph the Dog is still very much with us. I took him to the vet a couple of weeks ago and we had a very candid conversation.

He listened to me describe the past year with Ralph, much of which I related in my last post here.

He looked at me with a compassionate look and said, "You know there's not a lot I can do for a 15-year-old dog to make him better."

I assured him I knew that and that I needed the wisdom of his years of his taking care of animals. He told me he felt that we have an obligation at some point to help our furry friends along when their quality of life has greatly deteriorated.

On the other hand, he told me that I know Ralph and I'll know when that time comes.

That's what a lot of you told me after my last post and I appreciate your words.

The fact is I'm not there yet. I've discussed it with everyone in the family and everyone agrees and understands.

So for now, Ralph continues with his life of mostly eating and sleeping. He still wags his tail at the door in the mornings when I get his leash and on some mornings he still jumps. That's definitely the high point of his day and the time when he has the most energy.

I told the doc I thought it would be relatively soon and he said to just let him know. He said he would ask me to bring him in toward the end of the day when things are quiet. Again, he said he felt I would know.

And I'll trust the process.